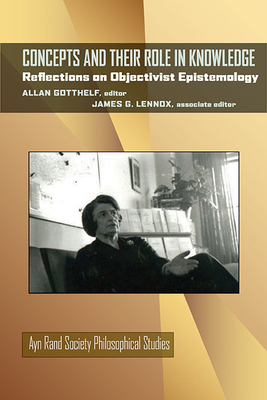 Concepts and Their Role in Knowledge

The philosopher and novelist Ayn Rand (1905–1982) is a cultural phenomenon. Her books have sold more than twenty-eight million copies, and countless individuals speak of her writings as having significantly influenced their lives. Despite her popularity, Rand’s philosophy of Objectivism has received little serious attention from academic philosophers.

Concepts and Their Role in Knowledge offers scholarly analysis of key elements of Ayn Rand’s radically new approach to epistemology. The four essays, by contributors intimately familiar with this area of her work, discuss Rand’s theory of concepts—including its new account of abstraction and essence—and its central role in her epistemology; how that view leads to a distinctive conception of the justification of knowledge; her realist account of perceptual awareness and its role in the acquisition of knowledge; and finally, the implications of that theory for understanding the growth of scientific knowledge. The volume concludes with critical commentary on the essays by distinguished philosophers with differing philosophical viewpoints and the author’s responses to those commentaries.

“A landmark set of essays, with comments and responses, exploring the implications of Rand's theories on perception, concept-formation, definition, justification, and conceptual change in science. The publication of this remarkable and engaging volume brings to the attention of professionals a theory of knowledge whose depth, breadth, and nuance may surprise them.”
—Harry Binswanger, Editor, second edition of Ayn Rand’s Introduction to Objectivist Epistemology


“By locating Rand’s theory of concepts in both traditional and contemporary debates, this collection offers a textured portrait of her distinctive view while also advancing the debates themselves. The essays are uniformly engaging and incisive, making substantial contributions on such topics as definitions, theory change, and epistemic justification. The crosscurrents in the comments and responses make the issues come alive, and broader applications (such as for value theory) are apparent. Overall, a terrific contribution.”
—Tara A. Smith, University of Texas-Austin

“This second volume of Ayn Rand Society Philosophical Studies provides extensive analysis of Ayn Rand’s epistemology, the most important—but perhaps the least well-known—part of her philosophy of Objectivism. Contributed by scholars both sympathetic to and critical of Rand’s approach, these revealing essays address a wide range of topics, including Rand’s unique accounts of concept-formation and objectivity.”
—Darryl Wright, Harvey Mudd College

James G. Lennox is professor of history and philosophy of science at the University of Pittsburgh. He is the author of Aristotle: On the Parts of Animals I–IVand Aristotle’s Philosophy of Biology: Studies in the Origins of Life Science. Lennox is coeditor of Philosophical Issues in Aristotle’s Biology;Being, Nature, and Life in Aristotle: Essays in Honor of Allan Gotthelf; and Concepts, Theories, and Rationality in the Biological Sciences.