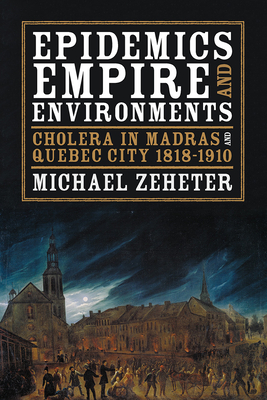 Throughout the nineteenth century, cholera was a global scourge against human populations. Practitioners had little success in mitigating the symptoms of the disease, and its causes were bitterly disputed. What experts did agree on was that the environment played a crucial role in the sites where outbreaks occurred. In this book, Michael Zeheter offers a probing case study of the environmental changes made to fight cholera in two markedly different British colonies: Madras in India and Quebec City in Canada.
The colonial state in Quebec aimed to emulate British precedent and develop similar institutions that allowed authorities to prevent cholera by imposing quarantines and controlling the disease through comprehensive change to the urban environment and sanitary improvements. In Madras, however, the provincial government sought to exploit the colony for profit and was reluctant to commit its resources to measures against cholera that would alienate the city’s inhabitants. It was only in 1857, after concern rose in Britain over the health of its troops in India, that a civilizing mission of sanitary improvement was begun. As Zeheter shows, complex political and economic factors came to bear on the reshaping of each colony's environment and the urgency placed on disease control.

"Zeheter handles all these issues with an evident authority. In doing so, his work deserves to be regarded as a serious contribution to the wider fields of imperial medicine and imperial administration."
—Social History of Medicine

“The strength of Zeheter's analysis lies in his exploration of colonial states and their politics through a set of two perfectly graphic examples.”
—Studies in History and Philosophy of Biological and Biomedical Sciences

“Michael Zeheter does an excellent job of situating cholera within an important international context of the time by comparing the disease’s impact on two very different British colonial urban spaces.”
—Myron Echenberg, author of Africa in the Time of Cholera: A History of Pandemics from 1817 to the Present

Michael Zeheter is a research associate and lecturer in the department of history at the University of Trier.
Loading...
or
Not Currently Available for Direct Purchase