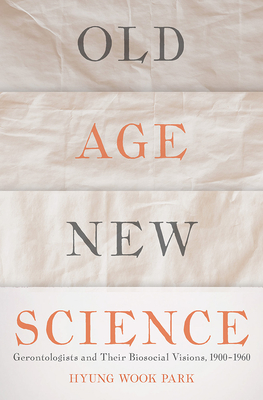 Gerontologists and Their Biosocial Visions, 1900-1960

Between 1870 and 1940, life expectancy in the United States skyrocketed while the percentage of senior citizens age sixty-five and older more than doubled—a phenomenon owed largely to innovations in medicine and public health. At the same time, the Great Depression was a major tipping point for age discrimination and poverty in the West: seniors were living longer and retiring earlier, but without adequate means to support themselves and their families. The economic disaster of the 1930s alerted scientists, who were actively researching the processes of aging, to the profound social implications of their work—and by the end of the 1950s, the field of gerontology emerged.
Old Age, New Science explores how a group of American and British life scientists contributed to gerontology’s development as a multidisciplinary field. It examines the foundational “biosocial visions” they shared, a byproduct of both their research and the social problems they encountered. Hyung Wook Park shows how these visions shaped popular discourses on aging, directly influenced the institutionalization of gerontology, and also reflected the class, gender, and race biases of their founders.

"Park's splendid accomplishment appears propitiously. Park extends to newcomers and veterans in gerontology illuminating lessons. Mining the past for precedents that might inform present thinking entails more than prefatory throat-clearing. Park shows a second generation of gero-historians how to offer possibilities for rediscovering patterns and mechanisms through concerted searches for a usable past."
—The Gerontologist

“This meticulously researched, well-written study of gerontology’s developmental years in the United States and the United Kingdom is a detailed, masterful account of a topic whose origins will not have to be revisited for many years.”
—Choice

“Through extensive archival research, Hyung Wook Park has unearthed a wealth of fascinating detail about the work of the pioneering life scientists who established gerontology as a multidisciplinary scientific field. His book will likely stand for some time as the definitive historical account of gerontology.”
—Jesse Ballenger, author of Self, Senility, and Alzheimer’s Disease in Modern America: A History

“In his well-written descriptions of research and interpretations of its social roles, Park gives us an account of biosocial approaches to aging that provides something for many readers. Historians of life sciences and medicine will find that Park adds to the traditional histories of American (and British) science. He also provides new insights into historical studies of aging and the "old." Park offers an original look at the New Science of Old Age from the first half of the twentieth century.”
—Journal of the History of Biology

“Park is to be lauded for consulting an impressive array of both published and archival sources. . . . Park has provided much food for thought for scholars interested in this subject area —and his central chapter on McCay is an exemplary piece of synthetic scholarship.” —J. Rosser Matthews, University of Maryland, College Park

“This book is a very welcome and timely addition to scholarship on the history of scientific approaches to aging. It contains innovative analysis of archival data that will be of interest not only to a variety of researchers in the history of science and medicine but also to critical gerontologists and scholars in science and technology studies.”
—Tiago Moreira, Durham University

Hyung Wook Park is assistant professor of history at Nanyang Technological University in Singapore.
Loading...
or
Not Currently Available for Direct Purchase