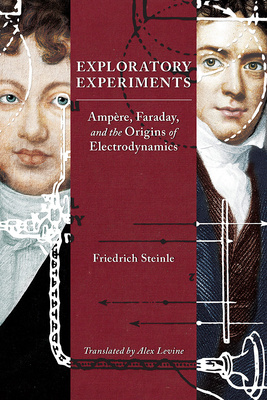 Ampère, Faraday, and the Origins of Electrodynamics

The nineteenth century was a formative period for electromagnetism and electrodynamics. Hans Christian Ørsted’s groundbreaking discovery of the interaction between electricity and magnetism in 1820 inspired a wave of research, led to the science of electrodynamics, and resulted in the development of electromagnetic theory. Remarkably, in response, André-Marie Ampère and Michael Faraday developed two incompatible, competing theories. Although their approaches and conceptual frameworks were fundamentally different, together their work launched a technological revolution—laying the foundation for our modern scientific understanding of electricity—and one of the most important debates in physics, between electrodynamic action-at-a-distance and field theories.

In this foundational study, Friedrich Steinle compares the influential work of Ampère and Faraday to reveal the prominent role of exploratory experimentation in the development of science. While this exploratory phase was responsible for decisive conceptual innovations, it has yet to be examined in such great detail. Focusing on Ampère’s and Faraday’s research practices, reconstructed from previously unknown archival materials, including laboratory notes, diaries, letters, and interactions with instrument makers, this book considers both the historic and epistemological basis of exploratory experimentation and its importance to scientific development.

Friedrich Steinle is professor of history of science at the Technical University of Berlin and president of the German Society for History of Science, Medicine, and Technology.

Alex Levine is professor of philosophy at the University of South Florida and editor of the journal Perspectives on Science.  He is coauthor of From Man to Ape and Darwinistas He has published translations from German, French, and Spanish, including Paul Hoyningen-Huene’s Reconstructing Scientific Revolutions and Formal Logic: A Philosophical Approach.


Praise For Exploratory Experiments: Ampère, Faraday, and the Origins of Electrodynamics…

“It is high time that Steinle’s original study, which introduces, develops, and defends the concept of exploratory experimentation, becomes available to an English-speaking audience. Not only does this book make accessible a wealth of previously unpublished primary sources related to Ampère’s and Faraday’s practices of studying electromagnetism, but it is also a powerful illustration of how history of science can be a valuable resource for philosophical thought.”
—Jutta Schickore, Indiana University

“This is an extraordinary book, destined to be a classic in several disciplines. It focuses on the work of two key figures, André-Marie Ampère and Michael Faraday, and the beginning phases of their exceptionally clear-cut, intense research into electromagnetism and the dynamics of the interactions between electrical currents and magnetic effects. Friedrich Steinle is one of the pioneers responsible for introducing the concept of exploratory experimentation into the philosophy of science.”
—Richard Burian, Virginia Tech

Praise for the German edition:

“Steinle is successful in presenting a fascinating picture of Ampère’s style in experimental praxis and in contextualizing his research program within the highly mathematized tradition of Laplacian physics.”
—Isis

Praise for the German edition:
“Steinle’s study can be recommended as a remarkable example of how to combine explicitly historical case studies with epistemological concepts in a manner that both parts benefit from the other. Moreover, the book is written very clearly and intelligibly. Therefore, readers who have no expertise in the history of electrodynamics will benefit from this study.”
—Nuncius

Praise for the German edition:
“This is a major contribution to scholarship on Ampère and Faraday. Steinle’s account of the interaction between exploratory experimentation and concept formation in Ampère’s and Faraday’s electrodynamic and electromagnetic work evinces a deep understanding of their concerns.”
—History and Philosophy of the Life Sciences