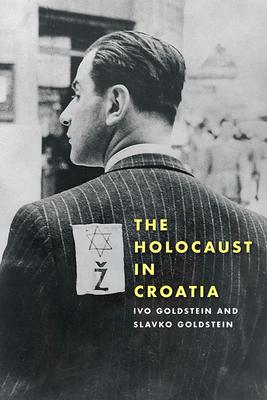 The Holocaust in Croatia (Russian and East European Studies) (Hardcover)

Published in association with the United States Holocaust Memorial Museum.

The Holocaust in Croatia recounts the history of the Croatian Jewish community during the Second World War, with a focus on the city of Zagreb. Ivo and Slavko Goldstein have grounded their study on extensive research in recently opened archives, additionally aided by the memories of survivors to supplement and enrich the interpretation of documents. The authors’ accessible narrative, here available in English for the first time, has been praised for its objectivity (including rare humane acts by those who helped to save Jews) and is complemented by a large bibliography offering an outstanding referential source to archival materials. As such, TheHolocaust in Croatia stands as the definitive account of the Jews in Croatia, up to and including the criminal acts perpetrated by the pro-Nazi Ustasha regime, adding significantly to our knowledge of the Holocaust.

Ivo Goldstein is a professor in the faculty of Humanities and Social Sciences at the University of Zagreb, Croatia. Since January of 2013, he has served as the Croatian Ambassador to France.
Slavko Goldstein is a writer, publicist, documentary film director, screenwriter, and politician. He was a member of Tito’s partisan units during the Ustasha regime.

Praise For The Holocaust in Croatia (Russian and East European Studies)…

"The authors document the destruction of about 80 percent of the Jews in the quasi-autonomous independent State of Croatia . . . Written in intimate detail, the book is an important source about a lesser-known corner of the Holocaust in the heart of Europe."
—Choice

“Anyone looking for an objective treatment of the Croatian Holocaust need look no further than Ivo and Slavko Goldstein’s TheHolocaust in Croatia. Based on extensive archival research, as well as energetic and comprehensive use of contemporary newspaper accounts and secondary sources, this volume, written by two of Croatia’s preeminent historians, tells the story of the Jewish community in Croatia from earliest times up through the Second World War, focusing especially on the Jewish community in Zagreb. This riveting account belongs in every university library.”
—Sabrina Petra Ramet, Norwegian University of Science and Technology

“At last, this nuanced synthesis of the Jewish community in Zagreb before and during the Holocaust is available in Nikolina Jovanovic's masterful translation. After a survey of the early twentieth century, the Goldsteins parse the bureaucracy that was put into place by the Croatian fascist state to disenfranchise Zagreb Jews and strip them of their property, their livelihood, their lives. Drawing on thousands of archival documents, they trace the fates of Zagreb's Jewish families and institutions and capture how the Holocaust played out in this small but important Central European city.”
—Ellen Elias-Bursac, prize-winning literary translator

"The Holocaust in Croatia is a voluminous work and a substantial contribution to the study of European Jewry. This new English translation is long overdue and destined to reach a far broader audience while influencing Holocaust Studies in a profound manner."
—European History Quarterly
or
Buy Here
Copyright © 2020 American Booksellers Association