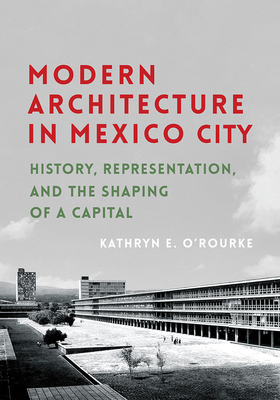 History, Representation, and the Shaping of a Capital (Culture Politics & the Built Environment)

Mexico City became one of the centers of architectural modernism in the Americas in the first half of the twentieth century. Invigorated by insights drawn from the first published histories of Mexican colonial architecture, which suggested that Mexico possessed a distinctive architecture and culture, beginning in the 1920s a new generation of architects created profoundly visual modern buildings intended to convey Mexico’s unique cultural character. By midcentury these architects and their students had rewritten the country’s architectural history and transformed the capital into a metropolis where new buildings that evoked pre-conquest, colonial, and International Style architecture coexisted.
Through an exploration of schools, a university campus, a government ministry, a workers’ park, and houses for Diego Rivera and Luis Barragán, Kathryn O’Rourke offers a new interpretation of modern architecture in the Mexican capital, showing close links between design, evolving understandings of national architectural history, folk art, and social reform. This book demonstrates why creating a distinctively Mexican architecture captivated architects whose work was formally dissimilar, and how that concern became central to the profession.

Praise For Modern Architecture in Mexico City: History, Representation, and the Shaping of a Capital (Culture Politics & the Built Environment)…

“While this highly compelling text concentrates on the architectural history of a rapidly modernizing Mexico in the first half of the twentieth century, it deftly blends cogent remarks on developments within the areas of photography and even painting and sculpture to give the reader a unique insight into the monuments and personalities of this era.”
—Edward J. Sullivan, New York University

"Nonspecialists will benefit from her discussion of the role that architecture played in advancing postrevolutionary goals. . . . Also valuable are the author's discussion of English-language works on Mexican architecture that followed Baxter's work and O'Rourke's treatment of the impact on the architects of folk art and the work of artists."
—American Historical Review

Kathryn E. O’Rourke is associate professor of art history at Trinity University in San Antonio.
Loading...
or
Not Currently Available for Direct Purchase