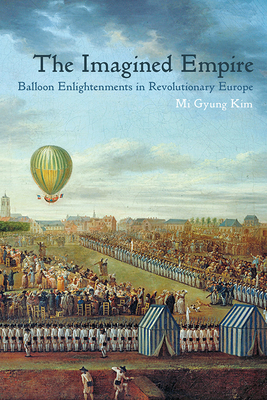 The hot-air balloon, invented by the Montgolfier brothers in 1783, launched for the second time just days before the Treaty of Paris would end the American Revolutionary War. The ascent in Paris—a technological marvel witnessed by a diverse crowd that included Benjamin Franklin—highlighted celebrations of French military victory against Britain and ignited a balloon mania that swept across Europe at the end of the Enlightenment. This popular frenzy for balloon experiments, which attracted hundreds of thousands of spectators, fundamentally altered the once elite audience for science by bringing aristocrats and commoners together.
The Imagined Empire explores how this material artifact, the flying machine, not only expanded the public for science and spectacle but also inspired utopian dreams of a republican monarchy that would obliterate social boundaries. The balloon, Mi Gyung Kim argues, was a people-machine, a cultural performance that unified and mobilized the people of France, who imagined an aerial empire that would bring glory to the French nation. This critical history of ballooning considers how a relatively simple mechanical gadget became an explosive cultural and political phenomenon on the eve of the French Revolution.

Praise For The Imagined Empire: Balloon Enlightenments in Revolutionary Europe…

“This very sophisticated analysis of the ballooning era in the late 18th and early 19th centuries. . . will delight readers familiar with this period of European history. . . . Highly recommended.”
—Choice

“The Imagined Empire offers an enthralling inquiry into the origins of aerial flight. The work soars above the intricacies of the history of science and technology to offer readers a far-reaching panorama of the social, cultural, and political late eighteenth-century world that produced the first balloons.”
—Colin Jones, Queen Mary University of London

“With this book, Mi Gyung Kim makes a major intervention in the scholarly literature on the period surrounding the French Revolution, offering a new account of the first constitution of the mass public in France through a revisionist history of ballooning. This highly original contribution to the history of science and technology links science to political and literary culture at this critical historical moment.”
—Mary Terrall, University of California, Los Angeles

“The Imagined Empire takes a highly sophisticated and profound view of the interrelations between technology, knowledge, governmentality, and public order. Mi Gyung Kim makes a radical assertion about the changing relationship between the polity and imagined new forms that it might take, the configuration of societies, and natural knowledge. Her book is an important, innovative contribution to French and Enlightenment history and the history of science and technology that will change the direction of the field.”
—Emma Spary, University of Cambridge

“This book, with its wealth of material, addresses important issues in the history of balloons and ballooning and in the way that the beginning of manned flight connected to changes in the ways the world was experienced, as a place of both possibility and change in individuals and in the French Republics that came after 1789.”
—Dorinda Outram, University of Rochester

"The Imagined Empire helps fill in the French context of philosophical meanings carried by balloons in the 1780s; especially on the first year of balloon experiments, it adds productively to aerial thinking by exploring how science has a politics as well as a history."
—Aero Society

"Mi Gyung Kim provides a thoroughly researched and informative account of the development and popular reception of balloon flight in Old Regime France and beyond. . ."
—American Historical Review

Mi Gyung Kim is professor of history at North Carolina State University. She is the author of Affinity, That Elusive Dream: A Genealogy of the Chemical Revolution.
Loading...
or
Not Currently Available for Direct Purchase