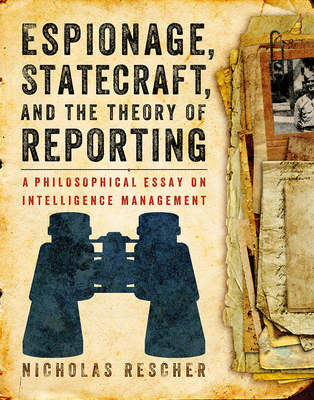 Espionage, Statecraft, and the Theory of Reporting

A Philosophical Essay on Intelligence Management

Everything we know about what goes on in the world comes to us through reports, information transmitted through human communication. We rely on reports, which can take any number of forms, to convey useful information, and we derive knowledge from that information. It's no surprise, then, that reporting has many philosophical dimensions. Because it plays such a major role in knowledge management, as Nicholas Rescher argues, the epistemology of reporting not only deserves our attention but also sheds important light on how we understand the theory of knowledge. This book offers a clear, accessible introduction to the theory of reporting, with a special emphasis on national security, particularly military and diplomatic reporting, drawing on examples from historical accounts of espionage and statecraft from the Second World War. Rescher explores the various issues and problems related to the production and reception of reports—including reporter expertise and trustworthiness, transmission modalities, confidentiality, cognitive importance, and the interpretation, evaluation, and utilization of reports—providing readers with a distinctive and well organized philosophical clarification of some central features of the theory of reporting.

Praise For Espionage, Statecraft, and the Theory of Reporting: A Philosophical Essay on Intelligence Management…

“Nicholas Rescher offers a lucid and illuminating general introduction to the theory of reporting. I highly recommend this book for its distinctive and organized philosophical clarification of some central features about the nature of reporting.”
—Paul K. Moser, Loyola University Chicago

“In this book, Nicholas Rescher, one of the preeminent figures in twentieth-century philosophy, turns his attention to intelligence analysis in espionage and statecraft. The result is a characteristically clear and clear-headed discussion that will appeal to both amateur and professional philosophers alike.”
—Joseph Shieber, author of Testimony: A Philosophical Introduction

Nicholas Rescher is Distinguished University Professor of Philosophy at the University of Pittsburgh and co-chairman of the Center for Philosophy of Science. A member of the American Academy of Arts and Sciences, he has served as president of the Eastern Division of the American Philosophical Association, the Leibniz Society of North America, the Charles S. Peirce Society, the American Catholic Philosophical Association, and the Metaphysical Society of America. Rescher is the author or editor of more than one hundred books, including Ignorance (On the Wider Implications of Deficient Knowledge), Philosophical Inquiries: An Introduction to Problems of Philosophy, and A Journey through Philosophy in 101 Anecdotes.
Loading...
or
Not Currently Available for Direct Purchase