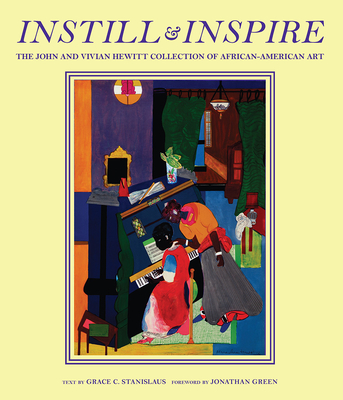 The John and Vivian Hewitt Collection of African-American Art

For over fifty years, John and Vivian Hewitt visited galleries, artists’ studios, and exhibitions in the United States, the Caribbean, and elsewhere in the Americas, collecting hundreds of paintings, etchings, and sketches. The John and Vivian Hewitt Collection of African American Art represents fifty-eight works that celebrate the expression and passion of twenty artists, including Romare Bearden, Margaret Burroughs, Jonathan Green, Jacob Lawrence, Elizabeth Catlett, Ann Tanksley, and Henry Ossawa Tanner.  The Hewitts believed that sharing their collection with the public would enhance the visibility of artists of African descent and showcase their cultural contributions. The Hewitt Collection was subsequently acquired by the Bank of America and generously donated to The Harvey B. Gantt Center for African American Arts and Culture in Charlotte, North Carolina.
This book contains all fifty-eight works from the collection, exquisitely reproduced in full color. Grace C. Stanislaus provides a text on the significance of the collection that is supplemented by interviews with Vivian Hewitt, David Taylor of the Gantt Center, art collectors Harmon and Harriett Kelley and Nancy Washington.

Praise For Instill and Inspire: The John and Vivian Hewitt Collection of African-American Art…

"Instill and Inspire outlines the [Hewitt’s] rich cultural life and includes reflections by three other influential collector couples including Nancy and Milton Washington of Pittsburgh. A thorough and insightful essay by Grace Stanislaus, director of the National Black Arts Festival, establishes the significance of the Hewitts’ contribution—and that of African-American artists in general—within the context of American cultural, art and political history ... a major step toward ensuring the legacy of the artists presented."
—Pittsburgh Post-Gazette

“We are an excellent example that you do not have to be rich to love art, to collect art. We mentored other people who were starting their collections. I can’t begin to tell you how proud and pleased we are to have young people come up to me and say, ‘Mrs. Hewitt, you’ve inspired me. I’m starting to collect.’ And I tell them, ‘Don’t hesitate. Just do it. Just start.’”
—Vivian Davidson Hewitt