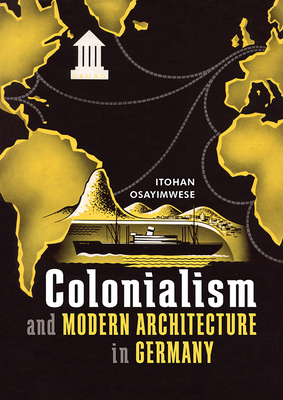 Over the course of the nineteenth century, drastic social and political changes, technological innovations, and exposure to non-Western cultures affected Germany’s built environment in profound ways. The economic challenges of Germany’s colonial project forced architects designing for the colonies to abandon a centuries-long, highly ornamental architectural style in favor of structural technologies and building materials that catered to the local contexts of its remote colonies, such as prefabricated systems. As German architects gathered information about the regions under their influence in Africa, Asia, and the Pacific—during expeditions, at international exhibitions, and from colonial entrepreneurs and officials—they published their findings in books and articles and organized lectures and exhibits that stimulated progressive architectural thinking and shaped the emerging modern language of architecture within Germany itself.

“Itohan Osayimwese has amassed an extremely impressive body of original research that gives us a new view of modernism and colonialism in late nineteenth- and early twentieth-century Germany. This book is an ambitious and innovative project that will be a significant contribution to the history of modern architecture and colonialism in Imperial Germany.”
—Patricia Morton, University of California, Riverside

"Colonialism and Modern Architecture in Germany indicates the availability and potential of underused archival sources available to researchers willing both to stray off the well-worn paths of architectural history and to recognize the plurality of influences upon the emergence of modern architecture in Germany."
—Built Environment

"In this well-researched tome, Osayimwese documents the effects of Germany's colonial empire on the German public, exploring how the colonies and their indigenous inhabitants were portrayed to their German (and international) public."
—Architecture beyond Europe Journal

“Osayimwese carefully explores some of the interactions between Germany’s colonial experience and modernist architecture within wider frameworks of German cultural and social history.” —Journal of Modern History

Itohan Osayimwese is assistant professor of the history of art and architecture at Brown University.
Loading...
or support indie stores by buying on