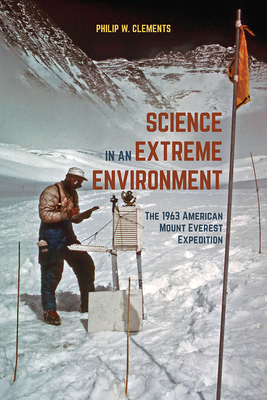 Science in an Extreme Environment

On February 20, 1963, a team of nineteen Americans embarked on the first expedition that would combine high-altitude climbing with scientific research. The primary objective of the six scientists on the team—who procured funding by appealing to the military and political applications of their work—was to study how severe stress at high altitudes affected human behavior. The expedition would land the first American on the summit of Mount Everest nearly three years after a successful (though widely disputed) Chinese ascent. At the height of the Cold War, this struggle for the Himalaya turned Everest into both a contested political space and a remote, unpredictable laboratory. The US expedition promised to resurrect American heroism, embodied in a show of physical strength and skill that, when combined with scientific expertise, would dominate international rivals on the frontiers of territorial exploration. It propelled mountaineers, scientists, and their test subjects 29,029 feet above sea level, the highest point of Chinese-occupied Tibet. There they faced hostile conditions that challenged and ultimately compromised standard research protocols, yielding results that were too exceptional to be generalized to other environments. With this book, Philip W. Clements offers a nuanced exploration of the impact of extremity on the production of scientific knowledge and the role of masculinity and nationalism in scientific inquiry.


Praise For Science in an Extreme Environment: The 1963 American Mount Everest Expedition…

“Science in an Extreme Environment offers an in-depth history of both the climbing and the science of one of the most significant and path-breaking American mountaineering ventures in the twentieth century. Much more than an adventure narrative, it deftly explores the relationship between extreme sports and advances in knowledge, making a welcome addition to the new trend in historical scholarship that engages questions of space and place.”
—Michael S. Reidy, Montana State University

“Philip Clements provides an entirely fresh perspective on a highly renowned and much celebrated expedition by putting the practice of science back at the center of the 1963 climb. He clearly demonstrates how the extreme local circumstances on Mount Everest shaped the research programs of the six scientists who appealed to Cold War anxieties in their bid to summit Everest—a space akin to the moon, foreign war zones, or submarine environments.”
—Stewart Weaver, University of Rochester

Philip W. Clements is a lecturer at California State University, Chico, where he teaches courses on history, the environment, and sustainability. He directs the Vulnerable Landscapes, Resilient Peoples project, which tracks how communities inhabiting sensitive geographies, including the Solu Khumbu, mitigate the deleterious effects of climate change.
Loading...
or
Not Currently Available for Direct Purchase