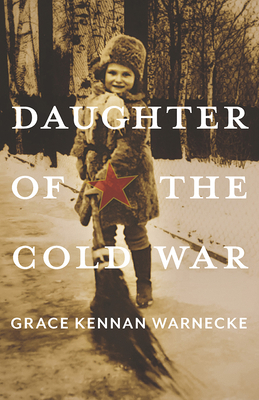 Daughter of the Cold War (Russian and East European Studies)

Grace Kennan Warnecke's memoir is about a life lived on the edge of history. Daughter of one of the most influential diplomats of the twentieth century, wife of the scion of a newspaper dynasty and mother of the youngest owner of a major league baseball team, Grace eventually found her way out from under the shadows of others to forge a dynamic career of her own.

Born in Latvia, Grace lived in seven countries and spoke five languages before the age of eleven. As a child, she witnessed Hitler’s march into Prague, attended a Soviet school during World War II, and sailed the seas with her father. In a multi-faceted career, she worked as a professional photographer, television producer, and book editor and critic. Eventually, like her father, she became a Russian specialist, but of a very different kind. She accompanied Ted Kennedy and his family to Russia, escorted Joan Baez to Moscow to meet with dissident Andrei Sakharov, and hosted Josef Stalin’s daughter on the family farm after Svetlana defected to the United States. While running her own consulting company in Russia, she witnessed the breakup of the Soviet Union, and later became director of a women’s economic empowerment project in a newly independent Ukraine.

Daughter of the Cold War is a tale of all these adventures and so much more. This compelling and evocative memoir allows readers to follow Grace's amazing path through life – a whirlwind journey of survival, risk, and self-discovery through a kaleidoscope of many countries, historic events, and fascinating people.

“Grace Kennan Warnecke isn't as well known as other Kennans have been, but she should be and this memoir shows why. It's a vivid account of living a life of one's own with a famous father, supplying much that's missing in other biographies. Highly recommended.” —John Lewis Gaddis, Yale University, author of George F. Kennan: An American Life


“With admiration and awareness of her father George F. Kennan’s biases, Grace Kennan Warnecke provides details of an extraordinarily vibrant life, spanning many relocations, relationships, and projects in the arts, journalism, and business as a leading Russia expert and critic. Warnecke emerges as a remarkable East-West interlocutor, one who floated across transnational communities and social circles, and skillfully managed the hidden complexities of both Cold War high-stakes diplomacy and the challenging environments of the new post-Soviet states.” —Alexander Cooley, Director, Harriman Institute, Columbia University

“Beautifully crafted, a pleasure to read. Warnecke is more than just George F. Kennan’s daughter. She was present at important historical events and adds interesting details as to how we understand them. Few Americans have the depth and duration of interaction with Russia Warnecke has, so that her observations about Soviet and Russian life are of importance. Her life  reveals what it meant to be an intelligent, professional woman for much of the late twentieth century.” —Blair Ruble, Vice President for Programs at the Woodrow Wilson Center

"Warnecke delicately traces the all-too-familiar journey of young women of her day, recalling how she initially saw her place as servant and enabler, and only later in life realized that she did not have to define herself by either her father or her domineering second husband." —Times Literary Supplement

Grace Kennan Warnecke serves as Chairman of the Board of the National Committee on American Foreign Policy. She has had a lifelong association with Russia and the former Soviet Union.  She is the former chair of the National Advisory Council, Harriman Institute, at Columbia University, and a member of the Advisory Council of the Kennan Institute. She served as country director for Winrock International in Kyiv, Ukraine, from 1999 to 2003. The former president of SOVUS Business Consultants, she was also the founder and project supervisor of the Volkhov International Small Business Incubator in Russia and executive vice president of the Alliance of American and Russian Women. Additionally, Grace Kennan Warenecke was founding executive director of the American-Soviet Youth Orchestra and associate producer of the prize-winning PBS documentary The First Fifty Years: Reflections on U.S.-Soviet Relations.  As a professional photographer she was senior editor of A Day in the Life of the Soviet Union. She has served as an election observer in Georgia, Ukraine, and Azerbaijan. In 2013 she was named a senior scholar at the Woodrow Wilson International Center for Scholars in Washington, D.C.  She lives in New York City and Martha’s Vineyard.