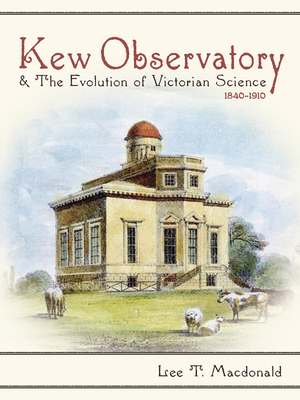 Kew Observatory and the Evolution of Victorian Science, 1840–1910 (Sci & Culture in the Nineteenth Century)

Kew Observatory was originally built in 1769 for King George III, a keen amateur astronomer, so that he could observe the transit of Venus. By the mid-nineteenth century, it was a world-leading center for four major sciences: geomagnetism, meteorology, solar physics, and standardization. Long before government cutbacks forced its closure in 1980, the observatory was run by both major bodies responsible for the management of science in Britain: first the British Association for the Advancement of Science, and then, from 1871, the Royal Society. Kew Observatory influenced and was influenced by many of the larger developments in the physical sciences during the second half of the nineteenth century, while many of the major figures involved were in some way affiliated with Kew.

Lee T. Macdonald explores the extraordinary story of this important scientific institution as it rose to prominence during the Victorian era. His book offers fresh new insights into key historical issues in nineteenth-century science: the patronage of science; relations between science and government; the evolution of the observatory sciences; and the origins and early years of the National Physical Laboratory, once an extension of Kew and now the largest applied physics organization in the United Kingdom.


Praise For Kew Observatory and the Evolution of Victorian Science, 1840–1910 (Sci & Culture in the Nineteenth Century)…

"This book offers a major corrective to the current literature as it stands by challenging the idea that the end of the nineteenth century represents a period when state-supported science triumphed over the laissez-faire attitude of the earlier part of the same century. Lee Macdonald provides us with a new perspective, one that enhances not just the richness of the period but also the historical actors involved and, of course, the institution that Kew Observatory was." —Omar Nasim, author of Observing by Hand: Sketching the Nebulae in the Nineteenth Century

"Macdonald has skillfully combined Kew Observatory's multistranded histories into a single narrative set within a framework of perceptive analysis. Meticulously researched from previously neglected primary sources, this impressive book will be an essential reference for anyone interested in the complex interplay between science and the state during the Victorian period." —Louise E. Devoy, Curator, Royal Observatory, Greenwich


"A critical analysis of the observatory's history from its founding in 1840 until its reorganization during the first two decades of the twentieth century." —H-Net Review

"Lee T. Macdonald has produced a book that is arguably the first definitive history of an important part of the existence of the observatory." —Monthly Weather Review

"Lee T. Macdonald’s excellent historical analysis of Kew shows, in short, that Kew Observatory was a much more important and interesting institution than many scholars have previously realized." —David Cahan, Journal for the History of Astronomy

Lee T. Macdonald is research facilitator at the University of Oxford’s Museum of the History of Science, and a fellow of the Royal Astronomical Society. He is the author of How to Observe the Sun Safely.
Loading...
or
Not Currently Available for Direct Purchase