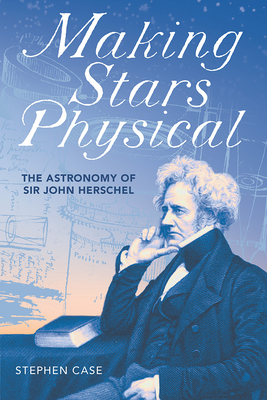 The Astronomy of Sir John Herschel

Making Stars Physical offers the first extensive look at the astronomical career of John Herschel, son of William Herschel and one of the leading scientific figures in Britain throughout much of the nineteenth century. Herschel’s astronomical career is usually relegated to a continuation of his father, William’s, sweeps for nebulae. However, as Stephen Case argues, John Herschel was pivotal in establishing the sidereal revolution his father had begun: a shift of attention from the planetary system to the study of nebulous regions in the heavens and speculations on the nature of the Milky Way and the sun’s position within it.

Through John Herschel’s astronomical career—in particular his work on constellation reform, double stars, and variable stars—the study of stellar objects became part of mainstream astronomy. He leveraged his mathematical expertise and his position within the scientific community to make sidereal astronomy accessible even to casual observers, allowing amateurs to make useful observations that could contribute to theories on the nature of stars. With this book, Case shows how Herschel’s work made the stars physical and laid the foundations for modern astrophysics.

“Stephen Case brings fresh clarity and coherence to a story many considered too complicated ever to tell. This is an engaging, thoughtful, and thorough book that makes sense of John Herschel’s disparate scientific interests, and in doing so deftly explores the wider world of nineteenth-century British astronomy.” —Emily Winterburn, author of The Quiet Revolution of Caroline Herschel: The Lost Heroine of Astronomy

“Making Stars Physical is a major contribution to the body of published work on John Herschel. In his wide-ranging and deeply researched book, Case argues convincingly that Herschel played a key role in demonstrating that the stars are truly measurable physical objects rather than merely points of light.” —Robert Smith, University of Alberta

"A welcome addition to the growing body of work on the lives and scientific contributions of the prolific Herschel family. . . . Case nicely fits the details of Herschel's long, productive, and influential career into the wider context of nineteenth-century astronomy and the rise of physics." —Journal for the History of Astronomy

"A meticulously researched and lucidly presented examination of Sir John Herschel's astronomical and physical science. What comes across so impressively in the book is Herschel's deeply pragmatic approach to cosmology. . . . Stephen Case has produced a rich and fascinating book. I warmly recommend it, as a major contribution to astronomical history and to Herschel studies in particular." —The Journal of the William Herschel Society

Stephen Case is an associate professor in the Department of Chemistry and Geosciences at Olivet Nazarene University, where he is also director of the Strickler Planetarium and serves as associate director of the university honors program.
Loading...
or
Not Currently Available for Direct Purchase