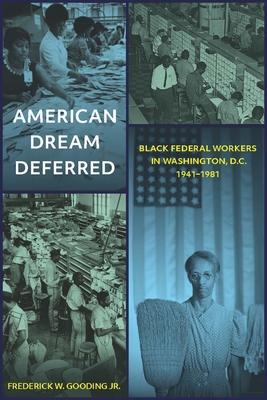 As the largest employer of one of the world’s leading economic and geo-political superpowers, the history of the federal government’s workforce is a rich and essential tool for understanding how the “Great Experiment” truly works. The literal face of federal policy, federal employees enjoy a history as rich as the country itself, while reflecting the country’s evolution towards true democracy within a public space.  Nowhere is this progression towards democracy more apparent than with its internal race relations. While World War II was a boon to black workers, little is known about the nuanced, ongoing struggles for dignity and respect that black workers endured while working these “good, government jobs.” American Dream Deferredchallenges postwar narratives of government largess for African Americans by illuminating the neglected stories of these unknown black workers.

“American Dream Deferred is a pioneering work of scholarship about one of the most significant struggles of the modern black freedom movement, one that has been almost completely untold until now. Frederick Gooding’s vivid narrative about the long and difficult struggle of African-Americans who worked in the federal government reveals that more than laws and regulations were needed to gain equality and respect. Only when black men and women in the nation’s capital organized for themselves did they gain the rights and opportunities they had always deserved.” —Michael Kazin, Georgetown University


“In this timely and critically important study, Frederick Gooding, Jr.’s meticulous research illuminates the understudied history of African American federal workers from World War II to the Reagan era. With perceptive analysis, Gooding, Jr. explores not only the causes and costs of systemic racism in the federal workplace, but also the heroic efforts made by ‘black collared’ workers to uproot it.” —Margaret Rung, Roosevelt University


"American Dream Deferred presents a cogent analysis of the persistence of racial inequities in the one institution commonly considered the benchmark of meritocratic impartiality. It is also an important meditation on the capacity of institutionalized racism to limit upward mobility, inflict psychological damage, and quash dreams of a better life."—Michael Dennis, Arcadia University

"Gooding...show[s] the degree of resistance black federal employees faced in their new positions. . . .The American Dream of public sector employees was deferred as they waged private battles for dignity and respect, using the few legal and social mechanisms at their disposal for grassroots change. Gooding posits, as he writes in the introduction, that 'a "good government job" did not secure freedom as much as it secured the fantasy of freedom.'" —B.F. Le Beau, University of Saint Mary

"Contrary to the myth that black employees were welcomed in the federal sector in the latter half of the 20th century, Frederick W. Gooding, Jr.’s American Dream Deferred shows that the struggle for equal treatment was just as steep in government workplaces as it was in everyday life. . . . What Gooding, Jr. does well is examine the tortoise pace of progress for black federal workers and how that progress was thwarted at nearly every turn." —Historical Novel Society

“[Gooding] focusing so closely on the relationship between US presidents and Black federal workers . . . nicely synthesizes the ways that each administration handled racial matters. An American Dream Deferred makes a significant contribution to the growing fields of Black Washington, Black federal employment, and economic inequality after World War II.” —The Journal of African American History


“Gooding argues that while the federal government did provide thousands of jobs to Black workers—stretching from maintenance to clerical to professional and leadership positions—the promise was elusive and did not significantly improve economic prospects for African Americans.” —African American History