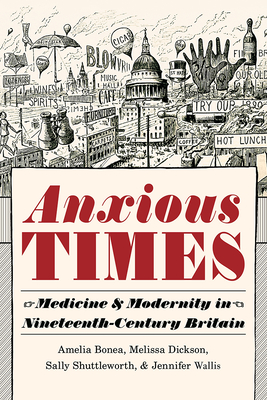 Much like the Information Age of the twenty-first century, the Industrial Age was a period of great social changes brought about by rapid industrialization and urbanization, speed of travel, and global communications. The literature, medicine, science, and popular journalism of the nineteenth century attempted to diagnose problems of the mind and body that such drastic transformations were thought to generate: a range of conditions or “diseases of modernity” resulting from specific changes in the social and physical environment. The alarmist rhetoric of newspapers and popular periodicals, advertising various “neurotic remedies,” in turn inspired a new class of physicians and quack medical practices devoted to the treatment and perpetuation of such conditions.

Anxious Times examines perceptions of the pressures of modern life and their impact on bodily and mental health in nineteenth-century Britain. The authors explore anxieties stemming from the potentially harmful impact of new technologies, changing work and leisure practices, and evolving cultural pressures and expectations within rapidly changing external environments. Their work reveals how an earlier age confronted the challenges of seemingly unprecedented change, and diagnosed transformations in both the culture of the era and the life of the mind.

Praise For Anxious Times: Medicine and Modernity in Nineteenth-Century Britain (Sci & Culture in the Nineteenth Century)…

“Anxious Timesdemonstrates that doctors and ordinary citizens were just as concerned about the effects of modern technology in the nineteenth century as people are today, and these earlier fears can be revealing. The authors take an original approach to the relationship between technological growth and public and medical perceptions of nervousness, physical debilitation, and mental illness by examining hidden, unexpected responses to overstimulation and bringing valuable new evidence to light.” —Laura Otis, Emory University

“Anxious Times succeeds in historicizing nineteenth-century anxieties about modernity’s effects on the human body and mind. But it also underscores their legacies. . . . This book thus makes a strong case for why the nineteenth century remains relevant.” —Bulletin of the History of Medicine

Amelia Bonea is a research fellow at the Centre for Transcultural Studies, University of Heidelberg.

Melissa Dickson is a lecturer in Victorian literature at the University of Birmingham.

Sally Shuttleworth is professor of English literature at the University of Oxford.

Jennifer Wallis is a teaching fellow in medical humanities at Imperial College London.