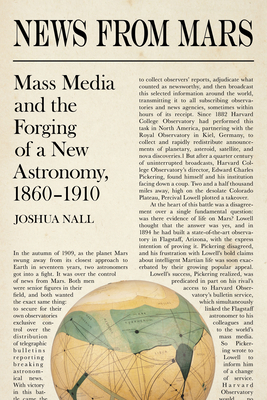 Mass Media and the Forging of a New Astronomy, 1860-1910 (Sci & Culture in the Nineteenth Century)

Mass media in the late nineteenth century was full of news from Mars. In the wake of Giovanni Schiaparelli’s 1877 discovery of enigmatic dark, straight lines on the red planet, astronomers and the public at large vigorously debated the possibility that it might be inhabited. As rivalling scientific practitioners looked to marshal allies and sway public opinion—through newspapers, periodicals, popular books, exhibitions, and encyclopaedias—they exposed disagreements over how the discipline of astronomy should be organized and how it should establish acceptable conventions of discourse.

News from Mars provides a new account of this extraordinary episode in the history of astronomy, revealing how major transformations in astronomical practice across Britain and America were inextricably tied up with popular scientific culture and a transatlantic news economy that enabled knowledge to travel. As Joshua Nall argues, astronomers were journalists, too, eliding practice with communication in consequential ways. As writers and editors, they played a pivotal role in the emergence of a “new astronomy” dedicated to the study of the physical constitution and life history of celestial objects, blurring harsh distinctions between those who produced esoteric knowledge and those who disseminated it.


Praise For News from Mars: Mass Media and the Forging of a New Astronomy, 1860-1910 (Sci & Culture in the Nineteenth Century)…

“Controversies over the ‘canals’ some astronomers claimed to observe on Mars attracted huge public interest in the decades around 1900. Joshua Nall’s detailed study reveals how these debates were made possible by changes in the relationship between observers and the public shaped by new means of communication including the telegraph and the expansion of popular journalism. He argues that science itself was transformed as much by the experts’ efforts to communicate with the public as by the new equipment in their observatories. This is a study that will influence our understanding of a major episode in the history of science, but also our understanding of the nature of science itself.” —Peter Bowler, Queen’s University Belfast

“Nall’s nuanced account of how astronomers attempted to discredit and compete with Proctor and Lowell shows that the disciplinary norms of professional astronomy emerged during, not before, the canal controversy.” —Physics Today


“The late nineteenth and early twentieth centuries were marked, in many countries, by an  insatiable appetite for news of the red planet. . . . Joshua Nall sets out to show us, in his impeccable book, how this vexing public fixation was a necessary and constitutive feature of ‘proper’ astronomy. . . . Nall’s account is cautiously and carefully set out, and very much convincing: an exemplary piece of work in the Lightman and Secord mode.” —British Journal for the History of Science


“Nall has written an important book, one that remaps the disciplinary landscape at a crucial period in the history of astronomy, moving us beyond over-simplified frameworks of popularization or anachronistic astronomical identities. . . . A refreshing and liberating take on a well-trodden subject. Highly recommended.” —Journal for the History of Astronomy


“Nall makes a compelling and deeply researched case . . . that historians of astronomy indeed need to be attentive to the entanglements of astronomy and media in the years between the 1860s and the 1920s. . . . News from Mars is, then, a major scholarly achievement, not just making better sense of supposedly well-trodden ground, but also pointing the way forward to different approaches to the history of modern astronomy.” —Physics in Perspective

Joshua Nall is curator of modern sciences at the Whipple Museum of the History of Science in the Department of the History and Philosophy of Science at the University of Cambridge. He is a fellow of the Royal Astronomical Society, where he serves as chair of the society’s Heritage Committee.