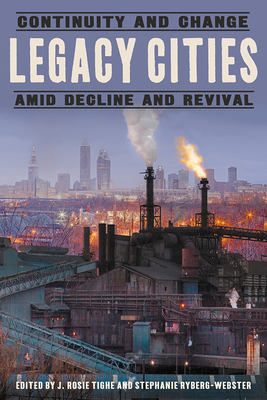 Continuity and Change amid Decline and Revival

Legacy cities, also commonly referred to as shrinking, or post-industrial cities, are places that have experienced sustained population loss and economic contraction. In the United States, legacy cities are those that are largely within the Rust Belt that thrived during the first half of the 20th century. In the second half of the century, these cities declined in economic power and population leaving a legacy of housing stock, warehouse districts, and infrastructure that is ripe for revitalization. This volume explores not only the commonalities across legacy cities in terms of industrial heritage and population decline, but also their differences. Legacy Cities poses the questions: What are the legacies of legacy cities? How do these legacies drive contemporary urban policy, planning and decision-making? And, what are the prospects for the future of these cities? Contributors primarily focus on Cleveland, Ohio, but all Rust Belt cities are discussed.

J. Rosie Tighe is an associate professor in the department of Urban Studies at Cleveland State University’s Levin College of Urban Affairs.

Stephanie Ryberg-Webster is an associate professor in the department of Urban Studies at Cleveland State University’s Levin College of Urban Affairs, where she also directs the Master of Urban Planning and Development program.

Praise For Legacy Cities: Continuity and Change amid Decline and Revival…

“The major contributions of Legacy Citiesare that it illustrates change is in the wind, which is being powered by organized citizen action at the neighborhood level, that despite the inability of city governments to take extensive transformative efforts, the citizens are marshalling resources forces for positive change, and that, as with Ezekiel, there is still life in these old bones.”
–John Mullin, University of Massachusetts Amherst

“Legacy Cities fills a much needed gap in the literature on early twentieth century American cities, like Pittsburgh and Cleveland, as well as others in the Rust Belt. The contributors provide good discussions of several important considerations cities must confront including the role of citizen engagement in the planning process; the condition and quality of rental property at the lower end of the rent spectrum; dealing with the unfinished business of racial reconciliation; and, a very important chapter on local policing in a contemporary context.”
–Robert Silverman, University at Buffalo

“Rarely do we find a book centered on the struggles and opportunities of cities like Cleveland, written by not just one or two urban policy experts, but an entire department of them. . . . The book sets the groundwork for residents, public officials, and business leaders to use policy levers to promote success and sustainability in the region.”
—Cleveland Scene