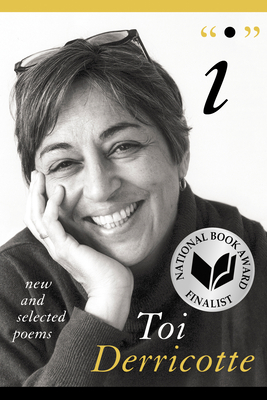 A Finalist for the 2019 National Book Award for Poetry

“How do you gain access to the
power of parts of yourself you
abhor, and make them sing
with beauty, tenderness, and compassion?

This is the record of fifty years
of victories in the reclamation
of a poet's voice.”

The story of Toi Derricotte is a hero's odyssey.  It is the journey of a poetic voice that in each book earns her way to home, to her own commanding powers.

I, New and Selected Poems shows the reader both the closeness of the enemy and the poet's inherent courage, inventiveness, and joy.  It is a record of one woman's response to the repressive and fracturing forces around the subjects of race, class, color, gender, and sexuality.  Each poem is an act of victory as they find their way through the repressive forces to speak with both beauty and truth.

This collection features more than thirty new poems as well as selections from five of Derricotte's previous published books of poetry.

Toi Derricotte is the author of The Undertaker’s Daughter (University of Pittsburgh Press, 2011) and four earlier collections of poetry, including Tender, winner of the 1998 Paterson Poetry Prize. Her literary memoir, The Black Notebooks (W.W. Norton), received the 1998 Anisfield-Wolf Book Award for Non-Fiction and was a New York Times Notable Book of the Year. Her honors include, among many others, the 2012 Paterson Poetry Prize for Sustained Literary Achievement, the 2012 PEN/Voelcker Award for Poetry, the Lucille Medwick Memorial Award from the Poetry Society of America, two Pushcart Prizes and the Distinguished Pioneering of the Arts Award from the United Black Artists. Derricotte is the co-founder of Cave Canem Foundation (with Cornelius Eady), Professor Emerita at the University of Pittsburgh and a Chancellor of the Academy of American Poets. Toi serves on Marsh Hawk Press’s Artistic Advisory Board.

Praise For I: New and Selected Poems (Pitt Poetry Series)…

“What song do you sing when you sing ‘so low we can't hear you?’ Toi Derricotte makes poetry of that song. It rises from ‘the houses where you hear the least squealing,’ it is ‘quieter than blossoms & near invisible.’ It is filled with witness and love for our literal and literary families.”
—Terrance Hayes

"No writer I know of explores with more honesty the sorrows and wonders and joys and shames and tenderness of being alive. No writer is more tender. And no poems I know of make me feel witnessed, held, beheld, the way Derricotte's do.--Ross Gay

“The new poems in Toi Derricotte’s collection ‘I’ reveal that she has entered an entire new sphere as a poet, in which the struggles fall away and the spirits take her hands and float her forward. After years of wrestling with her demons, Derricotte has awakened--enlightened, serene, truth coming to her, through her, so casually. She has earned this grace with all her hard work, suffering and love.”
—Alicia Suskin Ostriker

“This retrospective volume unflinchingly explores the author’s complex experiences as a light-skinned black woman in America. . . . Derricotte’s attention lingers on places of struggle where life is at its most vibrant, urgent, and surprising”
—Publishers Weekly

'I' offers Derricotte a bit of Thoreau’s doubleness, a chance to stand outside of her impressive body of work and view it anew. Thus the writer, much like the reader, has a fresh experience of 'All the years / of fear and raging / in my poems, the years I continued / in thankless silence — until I was empty / of it...'"—Kristofer Collins, Pittsburgh Magazine