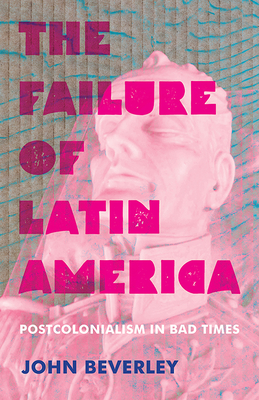 The Failure of Latin America

The Failure of Latin Americais a collection of John Beverley’s previously published essays and pairs them with new material that reflects on questions of postcolonialism and equality within the context of receding continental socialism. Beverley sees an impasse within both the academic postcolonial project and the Bolivarian idea of Latin America. The Pink Tide may have failed to permanently reshape Latin America, but in its failure there remains the possibility of an alternative modernity not bound to global capitalism. Beverley proposes that equality, modified by the postcolonial legacy, is a particularly Latin American possibility that can break the impasse and redefine Latinamericanism.


Praise For The Failure of Latin America: Postcolonialism in Bad Times (Pitt Illuminations)…

“The Failure of Latin America is clearly the work of a seasoned scholar with much to contribute to ongoing discussions. The field at large will be appreciative of a thoughtful study in its own right that, as Beverley hints here and there, serves also as intellectual testament. This book is in no way a ‘late’ opus, but a vigorous contribution. Fiery debate is likely to ensue.” —Héctor Hoyos, Stanford University

John Beverley is distinguished professor emeritus of Hispanic languages and literatures at the University of Pittsburgh.