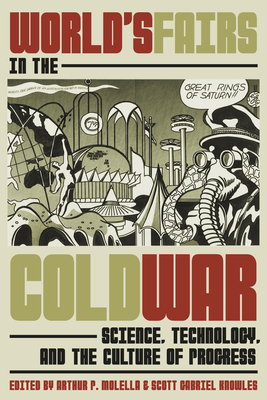 Science, Technology, and the Culture of Progress

The post–World War II science-based technological revolution inevitably found its way into almost all international expositions with displays on atomic energy, space exploration, transportation, communications, and computers. Major advancements in Cold War science and technology helped to shape new visions of utopian futures, the stock-in-trade of world’s fairs. From the 1940s to the 1980s, expositions in the United States and around the world, from Brussels to Osaka to Brisbane, mirrored Cold War culture in a variety of ways, and also played an active role in shaping it. This volume illustrates the cultural change and strain spurred by the Cold War, a disruptive period of scientific and technological progress that ignited growing concern over the impact of such progress on the environment and humanistic and spiritual values. Through the lens of world’s fairs, contributors across disciplines offer an integrated exploration of the US–USSR rivalry from a global perspective and in the context of broader social and cultural phenomena—faith and religion, gender and family relations, urbanization and urban planning, fashion, modernization, and national identity—all of which were fundamentally reshaped by tensions and anxieties of the Atomic Age.

Arthur P. Molella is curator emeritus at the Smithsonian’s Lemelson Center for the Study of Invention and Innovation, for which he was founding director. He is coeditor of Inventing for the Environment and Places of Invention and coauthor of Invented Edens: Techo-Cities of the 20th Century and World’s Fairs on the Eve of War. He is a member of the Society for the History of Technology and serves on the Executive Advisory Board of the National Academy of Inventors and the National Inventors Hall of Fame.

Scott Gabriel Knowles is professor and head of the department of history at Drexel University. He is a research fellow of the Disaster Research Center of the University of Delaware. Knowles is the author of The Disaster Experts: Mastering Risk in Modern America and editor of Imagining Philadelphia: Edmund Bacon and the Future of the City.

Praise For World's Fairs in the Cold War: Science, Technology, and the Culture of Progress…

This is a marvelous collection of essays that illuminates the role of world’s fairs in shaping the cultural contours of the Cold War. The essays are far-reaching, including pieces on the US and USSR as well as illuminating analysis of world’s fairs and the Cold War in Australia, Japan, and Singapore. The breadth and depth of the scholarship is impressive and sets the stage for understanding the most recent wave of world’s fairs in the 21st century.--Robert W. Rydell, author of All the World's a Fair