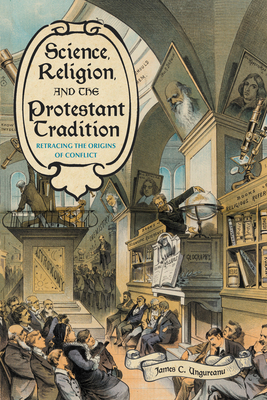 Science, Religion, and the Protestant Tradition

Retracing the Origins of Conflict (Sci & Culture in the Nineteenth Century)

The story of the “conflict thesis” between science and religion—the notion of perennial conflict or warfare between the two—is part of our modern self-understanding. As the story goes, John William Draper (1811–1882)  and Andrew Dickson White (1832–1918) constructed dramatic narratives in the nineteenth century that cast religion as the relentless enemy of scientific progress. And yet, despite its resilience in popular culture, historians today have largely debunked the conflict thesis. Unravelling its origins, James Ungureanu argues that Draper and White actually hoped their narratives would preserve religious belief. For them, science was ultimately a scapegoat for a much larger and more important argument dating back to the Protestant Reformation, where one theological tradition was pitted against another—a more progressive, liberal, and diffusive Christianity against a more traditional, conservative, and orthodox Christianity. By the mid-nineteenth century, narratives of conflict between “science and religion” were largely deployed between contending theological schools of thought. However, these narratives were later appropriated by secularists, freethinkers, and atheists as weapons against all religion. By revisiting its origins, development, and popularization, Ungureanu ultimately reveals that the “conflict thesis” was just one of the many unintended consequences of the Protestant Reformation.


Praise For Science, Religion, and the Protestant Tradition: Retracing the Origins of Conflict (Sci & Culture in the Nineteenth Century)…

“Ungureanu has undertaken extraordinarily exhaustive research and produced a volume that offers an insightful, refreshing re-evaluation of two of the most influential figures in the modern history of religion and science. This book promises to reshape how historians understand the origin of the conflict thesis.”—David Mislin, Temple University


“Ungureanu develops an arresting reinterpretation of John William Draper and Andrew Dickson White, traditionally perpetrators of the ‘conflict thesis,’ but whose intentions, he argues, were not to attack ‘religion’ but to protect its progressive forms from obstructive theological orthodoxies. I highly recommend this book, which is particularly important for historians of liberal Protestantism and its secularizing legacy in late nineteenth-century Anglophonic debates about ‘science and religion.’”—John Hedley Brooke, University of Oxford

"Ungureanu manages that most difficult task facing scholars writing for their own, as well as a more general readership, to keep up his narrative’s momentum and readability while at the same time refusing to trivialize or take short cuts. He does this very well, unfolding fascinating aspects of the emerging backdrop to Draper and White, such as the predominantly Anglo-American influences of the former and Germanic of the latter. The back-to-back chapters contrasting Anglican and American ecclesiastical responses to science are well-crafted, for example. But this is done as we delve into detail and read correspondence, tracts and less well-known. The major thesis, that the warfare narrative constitutes a major backfiring of an attack from one (liberal) wing of Christianity against another (conservative), unfolds with the inevitability of a slow-motion railroad crash. The reader can palpably feel the frustration of the avowed secularists who could not understand why Draper and White would not or could not see that their ‘purified (of theological doctrine) Christianity’ occupied a ‘land of bunk’."
--Tom McLeish, University of York

James C. Ungureanu is Historian in Residence at the George L. Mosse Program in History at the University of Wisconsin-Madison. A historian of science and religion, his research is mostly focused on nineteenth-century religious thought.