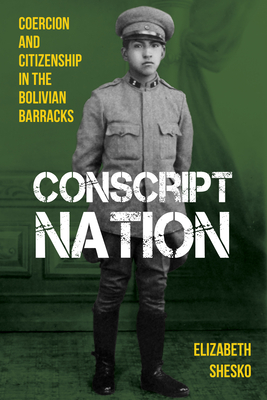 Military service in Bolivia has long been compulsory for young men. This service plays an important role in defining identity, citizenship, masculinity, state formation, and civil-military relations in twentieth-century Bolivia. The project of obligatory military service originated as part of an attempt to restrict the power of indigenous communities after the 1899 civil war. During the following century, administrations (from oligarchic to revolutionary) expressed faith in the power of the barracks to assimilate, shape, and educate the population. Drawing on a body of internal military records never before used by scholars, Elizabeth Shesko argues that conscription evolved into a pact between the state and society. It not only was imposed from above but was also embraced from below because it provided a space for Bolivians across divides of education, ethnicity, and social class to negotiate their relationships with each other and with the state. Shesko contends that state formation built around military service has been characterized in Bolivia by multiple layers of negotiation and accommodation. The resulting nation-state was and is still hierarchical and divided by profound differences, but it never was simply an assimilatory project. It instead reflected a dialectical process to define the state and its relationships.

“This is a wonderfully rich work of historical scholarship, wholly characteristic of the resourcefulness of that generation of Bolivianists now making its mark in the twenty-first century. Even for the quietest of times, first-hand investigation of military history is most exacting at empirical, emotional, and analytical levels. Elizabeth Shesko’s work on state-building in a far from quiet era reflects her own resilience and enterprise on each of these fronts. She has persuasively placed the institutions and cultures of conscription back at the centre of our understanding of the experience of Bolivian state and society during the twentieth century. Those in the global North for whom obligatory military service is an increasingly unfamiliar and distant phenomenon will find in this study many new insights on what is still an extensive and highly consequential experience in the South.” —James Dunkerley, Queen Mary University of London


“Conscript Nation is an important contribution to our understanding of how Latin Americans interacted with governments as the latter worked toward becoming effective national states. Elizabeth Shesko uses extensive research and intelligent analysis to show how ordinary people helped the state build its capacities but also simultaneously pursued their own goals and imagined themselves as Bolivians. She weaves together national politics, laws, and a wealth of social detail about the lives of recruits and civilians to demystify both the Bolivian experience of the Chaco War and the origins of the MNR. This well-written book is an outstanding contribution to Bolivian historiography and the social history of Latin American militaries.” —Peter Guardino, Indiana University


“Conscript Nation makes an important contribution to the literature on Bolivia and to our understanding of the armed forces’ place in Latin American society. . . . Elizabeth Shesko’s study provides several correctives to prevailing misconceptions about the military during the twentieth century and explores how conscription created a form of national belonging for the nation’s Indigenous majority.” —Hispanic American Historical Review

Elizabeth Shesko is assistant professor of history at Oakland University in Rochester, Michigan.
Loading...
or
Not Currently Available for Direct Purchase