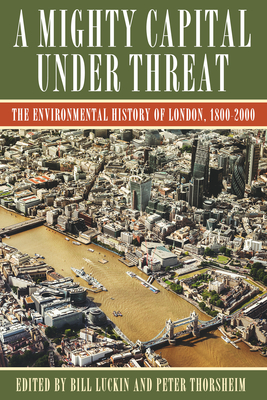 A Mighty Capital under Threat (Hardcover)

Demographically, nineteenth-century London, or what Victorians called the “new Rome,” first equaled, then superseded its ancient ancestor. By the mid-eighteenth century, the British capital had already developed into a global city. Sustained by its enormous empire, between 1800 and the First World War London ballooned in population and land area. Nothing so vast had previously existed anywhere. A Mighty Capital under Threat investigates the environmental history of one of the world’s global cities and the largest city in the United Kingdom. Contributors cover the feeding of London, waste management, movement between the city’s numerous districts, and the making and shaping of the environmental sciences in the late nineteenth and early twentieth centuries.

Bill Luckin is professor emeritus in Urban History at the University of Bolton and associate of the Center for the History of Science, Technology and Medicine at the University of Manchester. He is the author of Pollution and Control: A Social History of the Thames in the Nineteenth Century and Death and Survival in Urban Britain: Disease, Pollution and Environment, 1800–1950.

Peter Thorsheim is professor and director of graduate studies in history at the University of North Carolina, Charlotte. He is the author of Waste into Weapons: Recycling in Britainduring the Second World War and Inventing Pollution: Coal, Smoke, and the Environment in Britain since 1800.


Praise For A Mighty Capital under Threat: The Environmental History of London, 1800-2000 (Pittsburgh Hist Urban Environ)…

“Edited by two heavyweights of environmental history, this fascinating volume brings together work by many distinguished scholars. It details efforts to ameliorate experiences for the inhabitants of London since the late-eighteenth century. We are guided through the cholera years and the Great Stink, and into the twentieth century smog. Unlike the airs, waters and places described, the narrative is clear and refreshing.”—Emily Cockayne, University of East Anglia, Norwich

“There is never an inopportune moment to be reminded of the environmental harms associated with urban living. In A Mighty Capital Under Threat, an impressive array of scholars with deep knowledge of London history explore how we can tackle modern issues such as water supply, garbage, pollution, and the very question of ‘urban nature’ itself.”—Graham Mooney, Johns Hopkins University, Institute of the History of Medicine

"A Mighty Capital under Threat is a wonderful achievement. Luckin and Thorsheim have assembled a formidable cast of historians to explore how the nineteenth century's largest city dealt with an array of emergent, self-generated environmental threats--smoke, waste, disease. These marvelous essays make sense of London's magnificently messy material history. A triumph.”—Christopher Otter, The Ohio State University