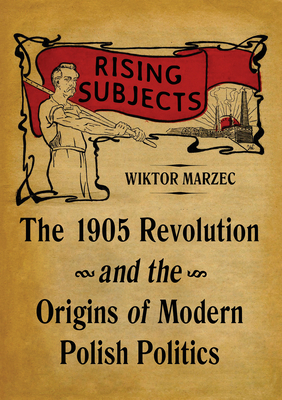 Rising Subjects explores the change of the public sphere in Russian Poland during the 1905 Revolution. The 1905 Revolution was one of the few bottom-up political transformations and general democratizations in Polish history. It was a popular rebellion fostering political participation of the working class. The infringement of previously carefully guarded limits of the public sphere triggered a powerful conservative reaction among the commercial and landed elites, and frightened the intelligentsia. Polish nationalists promised to eliminate the revolutionary “anarchy” and gave meaning to the sense of disappointment after the revolution.

This study considers the 1905 Revolution as a tipping point for the ongoing developments of the public sphere. It addresses the question of Polish socialism, nationalism, and antisemitism. It demonstrates the difficulties in using the class cleavage for democratic politics in a conflict-ridden, multiethnic polity striving for an irredentist self-assertion against the imperial power.


Praise For Rising Subjects: The 1905 Revolution and the Origins of Modern Polish Politics (Russian and East European Studies)…

“Rising Subjects is a highly valuable and original contribution to the constantly growing historiogra­phy of Russian Poland. Because it is a book with such a keen awareness of the broader significance of Pol­ish history, the monograph helps to locate the European periphery at the center of studies of modernity and modernization.” —Ab Imperio

“In this dynamic new study, Wiktor Marzec offers a fresh, theoretically informed interpretation of the 1905 Revolution in the Polish Kingdom, arguing that it shaped modern political attitudes and encampments despite its apparent short-term failure. Rising Subjects provides a nuanced examination of working class mobilization that will engage students of modern Eastern Europe, global social movements, and labor history.” —Keely Stauter-Halsted, Hejna Family Chair in the History of Poland, Department of History, University of Illinois at Chicago


“Meticulously researched, theoretically informed, and lucidly written, Rising Subjects shines new light on the 1905 revolution. Marzec convincingly shows how the revolution set the stage for modern politics in Poland.  Essential reading for those seeking to understand the origins of major cleavages that continue to shape the Polish public sphere today.” —Geneviève Zubrzycki, University of Michigan


“This volume, including its aptly chosen illustrations, makes a significant contribution to labor history literature in general and provides a stimulating social history of the multifarious variety of Polish nationalism.” —CHOICE


“The study will remain an important item in the 1905 Revolution bibliography, as an obligatory point-of-reference to the other scholars embarking on an exploration of the topic. Wiktor Marzec has once again confirmed his position as a scholar of international recognition in the field of the 1905–7 events.” —Acta Poloniae Historica


“In his brilliant analysis of the significance of the 1905 Revolution in Russian Poland, Wiktor Marzec shows how workers broke into the public sphere of a modernizing imperial periphery, turning the street and factory floor into the space of protest and debate.” —Europe-Asia Studies


“Thought-provoking . . . an innovating and convincing analysis of the dominant role workers played in the emergence of mass politics in Poland.” —Slavic Review


“Marzec’s book is an important addition to what we already know about the impact that 1905 had on Polish history. . . . [It] adds theoretical sophistication that provides for a deep understanding of the conflict between the elites and the masses, and as a result, it is an excellent study for the specialist and graduate students.” —Russian Review

Wiktor Marzec is an assistant professor and project leader in the Robert Zajonc Institute for Social Studies, University of Warsaw, Poland. Currently, he runs a comparative project on political trajectories of the late tsarist borderlands.
Loading...
or
Not Currently Available for Direct Purchase