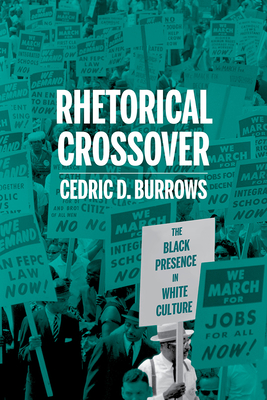 The Black Presence in White Culture (Composition, Literacy, and Culture)

In music, crossover means that a song has moved beyond its original genre and audience into the general social consciousness. Rhetorical Crossover uses the same concept to theorize how the black rhetorical presence has moved in mainstream spaces in an era where African Americans were becoming more visible in white culture. Cedric Burrows argues that when black rhetoric moves into the dominant culture, white audiences appear welcoming to African Americans as long as they present an acceptable form of blackness for white tastes. The predominant culture has always constructed coded narratives on how the black rhetorical presence should appear and behave when in majority spaces. In response, African Americans developed their own narratives that revise and reinvent mainstream narratives while also reaffirming their humanity. Using an interdisciplinary model built from music, education, film, and social movement studies, Rhetorical Crossover details the dueling narratives about African Americans that percolate throughout the United States.

“Rhetorical Crossover is a rhetorical takeover that boldly leads the fields of African American rhetoric and composition and rhetoric where they need to go. Burrows’s dynamic book shows us exactly where African American rhetoric has always already been and makes the reader feel the cultural impact of blackness that can’t be denied. Burrows takes the personal and shows us how it is political, rhetorical and culturally relevant. Communities inside and outside of academia can and should learn something from this important contribution.”—Gwendolyn D. Pough, Syracuse University

"In this interdisciplinary and engaging book, Dr. Cedric Burrows offers a close read of the black rhetorical presence in white culture. White narratives subvert or otherwise obscure social reality in order to reproduce white racial dominance and control of the meaning of black life. Black narratives value and create self-definition, to negotiate white-scripting, white-scaping, and whitesplaining. This work makes an important critique of ideas such as diversity and inclusion and the debt owed to black Americans for existing in and pushing to transform white space." —Elaine Richardson, The Ohio State University
or support indie stores by buying on
Copyright © 2020 American Booksellers Association