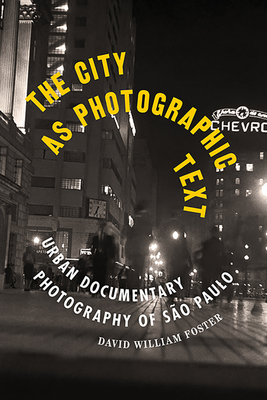 The City as Photographic Text

The City as Photographic Text offers the first comprehensive presentation of photography on São Paulo. But more than just a study of one city’s photographic legacy, this book is a manual for how to understand and talk about Latin American photography in general. Focusing on major figures and referencing widely available books of their work, David William Foster offers a unique analysis of how photographers have contributed to our understanding of the megalopolis São Paulo has become. Eschewing a conventional historical approach, Foster explores how best to interpret visual urban life. In turn, by focusing interest on the photographic text and the ways in which it creates an interpretive meaning for the city, rather than rehearsing the circumstances under which the photographs were taken, this study provides a model for productive comment on urban photography as a project of visual meaning with important artistic attributes. As a unique entry in the inventory of scholarly writing on São Paulo, The City as Photographic Text adds to our understanding of the enormous cultural significance this city holds as a world-class urban center.

“The City as Photographic Text is a visual treasure trove documenting an impressive range of modern São Paolo’s urban stories. David William Foster’s latest book combines close readings with energetic prose and an expansive command of Brazilian cultural history to assert the democratic nature and the narrative potential of urban photography.”—Benjamin Fraser, University of Arizona, editor in chief of Hispania and executive editor of Journal of Urban Cultural Studies


"Eloquently written and impeccably researched, Foster's poignant study tells the story of the city via this widely varied photography, taken by both men and women, both Brazilians and non-Brazilians. Factory workers, female cancer patients, ruins, bustling streets, a soccer stadium, aerial shots, and traffic all play a role in the collective image of the city that arises from these iconic and emergent photographs linked by a common geography." —Sophia Beal, University of Minnesota

David William Foster is a Regents Professor of Spanish and women and gender studies at Arizona State University. He is the author of Picturing the Barrio: Ten Chicano Photographers, El Eternauta, Daytripper, and Beyond: Graphic Narrative in Argentina and Brazil, and Argentine, Mexican, and Guatemalan Photography: Feminist, Queer, and Post-Masculinist Perspectives.
Loading...
or
Not Currently Available for Direct Purchase