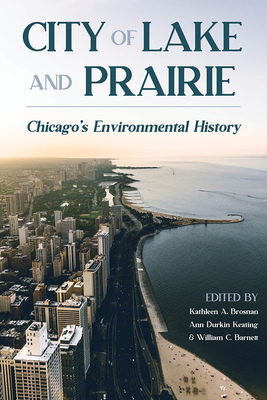 City of Lake and Prairie

Known as the Windy City and the Hog Butcher to the World, Chicago has earned a more apt sobriquet—City of Lake and Prairie—with this compelling, innovative, and deeply researched environmental history.  Sitting at the southwestern tip of Lake Michigan, one of the largest freshwater bodies in the world, and on the eastern edge of the tallgrass prairies that fill much of the North American interior, early residents in the land that Chicago now occupies enjoyed natural advantages, economic opportunities, and global connections over centuries, from the Native Americans who first inhabited the region to the urban dwellers who built a metropolis in the nineteenth and twentieth centuries. As one millennium ended and a new one began, these same features sparked a distinctive Midwestern environmentalism aimed at preserving local ecosystems. Drawing on its contributors’ interdisciplinary talents, this volume reveals a rich but often troubled landscape shaped by communities of color, workers, and activists as well as complex human relations with industry, waterways, animals, and disease.

“We live in an age of climate change. City of Lake and Prairie brings together leading historians, geographers, and ecologists to explain not only Chicago’s environmental history, but the region’s impact on larger North American landscapes. From the controlled prairie fires initiated by Native Americans long before the arrival of Europeans to the construction of Deep Tunnel at the turn of the twenty-first century, this innovative volume documents this rich and paradoxical past. City of Lake and Prairie is required reading for anyone interested in understanding not only the Chicago region’s environmental past, but it’s very future.” —Timothy J. Gilfoyle, Loyola University Chicago

"Nineteen fascinating essays, written by leading scholars, take us from Native American prairie burning through the ambitious engineering interventions and brutal manipulations of the industrial era, to more recent conservation and restoration crusades. This book will change the way we think about Chicago and it belongs on the bookshelf of readers who wish to better understand the relationship between nature and urban development.” —​Andrew Hurley, University of Missouri–St. Louis

"Chicago, gateway to the West, is a region where humans have had a complicated history of interaction with the natural world, from the earliest native peoples to present-day environmental activists. City of Lake and Prairie unfolds this remarkable story of ecological richness, destruction, and recovery in essays that are as fascinating and diverse as the communities that have called Chicago home." —Gerald W. Adelmann, President and CEO, Openlands

William C. Barnett is associate professor and chair of the History Department at North Central College in Naperville, Illinois.

Kathleen Brosnan is the Paul and Doris Eaton Travis Chair of Modern American History at the University of Oklahoma.