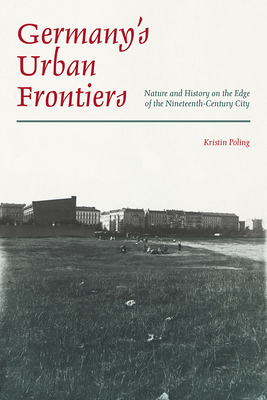 In an era of transatlantic migration, Germans were fascinated by the myth of the frontier. Yet, for many, they were most likely to encounter frontier landscapes of new settlement and the taming of nature not in far-flung landscapes abroad, but on the edges of Germany’s many growing cities. Germany’s Urban Frontiers is the first book to examine how nineteenth-century notions of progress, community, and nature shaped the changing spaces of German urban peripheries as the walls and boundaries that had so long defined central European cities disappeared. Through a series of local case studies including Leipzig, Oldenburg, and Berlin, Kristin Poling reveals how Germans on the edge of the city confronted not only questions of planning and control, but also their own histories and futures as a community.

Kristin Poling is assistant professor of European history at the University of Michigan–Dearborn.

Praise For Germany’s Urban Frontiers: Nature and History on the Edge of the Nineteenth-Century City (Pittsburgh Hist Urban Environ)…

“Kristin Poling’s innovative and deeply researched monograph uses nineteenth-century debates about de-fortification and the ongoing and uneven transformations of the urban edges to imagine the German burgher as a pioneer “frontiersman” caught between new horizons of development and the weight of a history and tradition; between the prerogatives of municipal administration and the dictates of the bureaucratic nation state; between the carefully planned pavement and parks and the “wilderness” hinterland at its edges; and between the infrastructures of a modernizing city and the unruly natures that challenged even the most adept engineer. By envisioning the city from its margins, Poling reinforces a key finding in urban studies: settlement frontiers, whether in the form of fashionable apartment blocks or improvised “shantytowns,” are not simply overflow from a crowded city but strategically and creatively shaped urban spaces in their own right.”–Thomas Lekan, University of South Carolina

“Through a series of insightful case studies, Poling shows how the shifting urban border, especially as embodied in the city wall, became a flashpoint for both conflicting interpretations of Germany’s urban past and competing visions for the ideal German city of the future. Her astute and engaging analysis encourages us to reevaluate much of our conventional wisdom regarding urbanization and modernity in nineteenth-century Germany.”--Matt Erlin, Washington University (St. Louis)
or support indie stores by buying on
Copyright © 2020 American Booksellers Association