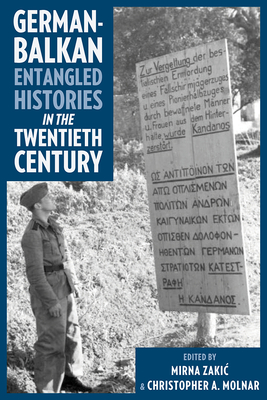 This volume brings together a diverse group of scholars from North America and Europe to explore the history and memory of Germany’s fateful push for power in the Balkans during the era of the two world wars and the long postwar period. Each chapter focuses on one or more of four interrelated themes: war, empire, (forced) migration, and memory. The first section, “War and Empire in the Balkans,” explores Germany’s quest for empire in Southeast Europe during the first half of the century, a goal that was pursued by economic and military means. The book’s second section, “Aftershocks and Memories of War,” focuses on entangled German-Balkan histories that were shaped by, or a direct legacy of, Germany’s exceptionally destructive push for power in Southeast Europe during World War II. German-Balkan Entangled Histories in the Twentieth Century expands and enriches the neglected topic of Germany’s continued entanglements with the Balkans in the era of the world wars, the Cold War, and today.

Mirna Zakić is associate professor of German history at Ohio University and the author of Ethnic Germans and National Socialism in Yugoslavia in World War II.

Christopher A. Molnar is associate professor of history at the University of Michigan–Flint and the author of Memory, Politics, and Yugoslav Migrations to Postwar Germany.

"This rich and insightful collection of articles ranges from the First World War to our own times, and covers re-settlements voluntary and forced across multiple borders; questions of collective guilt and trauma; trade relations and memorials, and features a riveting cast of actors, including linguistic minorities, emigre activists, racial anthropologists, propagandists, military occupiers, and vast numbers of ordinary people caught in the storms of history."
--Dr. Vejas Gabriel Liulevicius, University of Tennessee
or support indie stores by buying on
Copyright © 2020 American Booksellers Association