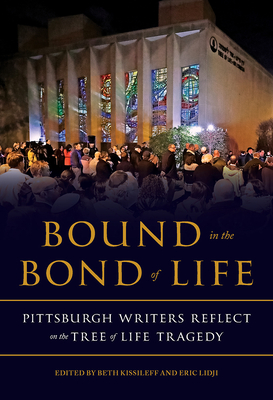 Bound in the Bond of Life (Hardcover)

On October 27, 2018, three congregations were holding their morning Shabbat services at the Tree of Life Synagogue in Pittsburgh’s Squirrel Hill neighborhood when a lone gunman entered the building and opened fire. He killed eleven people and injured six more in the deadliest anti-Semitic attack in American history. The story made national headlines for weeks following the shooting, but Pittsburgh and the local Jewish community could not simply move on when the news cycle did.

The essays in this anthology, written by local journalists, academics, rabbis, and other community members, reveal a city’s attempts to cope, make sense of, and come to terms with an unfathomable horror. Here, members from the three impacted congregations are able to reflect on their experiences in a raw, profound way. Local reporters who wrote about the event professionally contribute stories that they were unable to articulate until now. Activists consider their work at a calm distance from the chaotic intensity of their daily efforts. Academics mesh their professional expertise with their personal experiences of this shattering event in their hometown. Rabbis share their process of crafting comforting messages for their constituents when they themselves felt hopeless.

By bringing local voices together into a chorus, they are raised over the din of national and international chroniclers who offer important contributions but do not and cannot feel the intensity of this tragedy in the same way as locals. The essays in this anthology tell a collective story of city shaken to its very core, but determined that love will ultimately win.

A portion of the proceeds from the sale of this book will go to Jewish Family and Community Service of Pittsburgh.

Beth Kissileff is the author of the novel Questioning Return and editor of the essay collections Reading Genesis: Beginnings and Reading Exodus: Journeys.  She has taught at the University of Pittsburgh, the University of Minnesota, Carleton College, Smith College, and Mount Holyoke College.  Her writing has appeared in the Atlantic, Tablet, Religion News Service, Jewish Telegraphic Agency, and the New York Times, as well as other places. She is the spouse of Rabbi Jonathan Perlman of New Light Congregation, who survived the October 27 attack by hiding himself and others.

Eric Lidji is the director of the Rauh Jewish History Program & Archives at the Senator John Heinz History Center. He is the author of John Riegert and The Seventeenth Generation: The Lifework of Rabbi Walter Jacob and a co-editor of Her Deeds Sing Her Praises: Profiles of Pittsburgh Jewish Women. He writes extensively about the Jewish history of Western Pennsylvania and hosts the local Jewish history podcast The Cornerstone. He has been overseeing the effort to preserve documentation of the October 27 attack.


Praise For Bound in the Bond of Life…

“What does it take to mend the world? Parts prayer, howl, remembrance and meditation, the essays in Bound in the Bond of Life go beyond the initial shock and grief of October 27th to examine the meaning of community and the power of faith under attack. Rather than make sense of hate, the Pittsburghers here wisely try to find perspective on a moment evil struck too close to home.” —Stewart O’Nan, author of Emily, Alone and City of Secrets