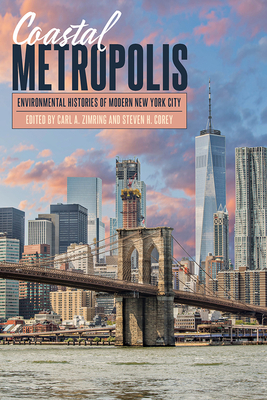 Built on an estuary, New York City is rich in population and economic activity but poor in available land to manage the needs of a modern city. Since consolidation of the five boroughs in 1898, New York has faced innumerable challenges, from complex water and waste management issues, to housing and feeding millions of residents in a concentrated area, to dealing with climate change in the wake of Superstorm Sandy, and everything in between. Any consideration of sustainable urbanism requires understanding how cities have developed the systems that support modern life and the challenges posed by such a concentrated population. As the largest city in the United States, New York City is an excellent site to investigate these concerns. Featuring an array of the most distinguished and innovative urban environmental historians in the field, Coastal Metropolis offers new insight into how the modern city transformed its air, land, and water as it grew.

“New York City historically benefitted from its connections to the Atlantic and to inland waters, and among its advantages was a shoreline suited, although unsustainably, to waste disposal. These essays explore the city’s troubled relation to this estuarian environment. As the city grew in population and physical space, it developed new means of dealing with waste management. Coastal Metropolis convincingly argues the importance of these systems—water delivery, sewers, and wastewater and solid waste disposal—to urban growth in New York City and in cities generally.”
--Richard Judd, University of Maine

“Water, so crucial to economic prosperity, requires a built environment—infrastructure—not only to ensure profit, but also to sustain the people who depend on it for survival. When most New Yorkers—indeed most Americans—think of “infrastructure,” they envision roads and bridges. This volume takes a different track, focusing on facilities and practices for handling wastewater, sewerage, and garbage. These essays provide both broad scope and important local detail. We need more works like this that focus on concentrated human populations in metropolitan areas.”--Timothy Silver, Appalachian State University

Carl A. Zimring is professor of sustainability studies in the Department of Social Science and Cultural Studies at Pratt Institute. He is the author of Aluminum Upcycled, Clean and White, and The Encyclopedia of Consumption and Waste, and co-author of Technology and the Environment in History, among other titles.

Steven H. Corey is professor of history and dean of the School of Liberal Arts and Sciences at Columbia College Chicago. He co-authored America’s Urban History and Garbage! The History of Politics and Trash in New York City and co-edited The American Urban Reader: History and Theory.