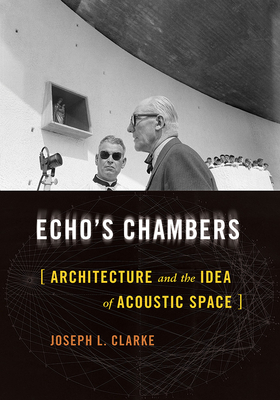 Architecture and the Idea of Acoustic Space

A room’s acoustic character seems at once the most technical and the most mystical of concerns. Since the early Enlightenment, European architects have systematically endeavored to represent and control the propagation of sound in large interior spaces. Their work has been informed by the science of sound but has also been entangled with debates on style, visualization techniques, performance practices, and the expansion of the listening public. Echo’s Chambers explores how architectural experimentation from the seventeenth through the mid-twentieth centuries laid the groundwork for concepts of acoustic space that are widely embraced in contemporary culture. It focuses on the role of echo and reverberation in the architecture of Pierre Patte, Claude-Nicolas Ledoux, Carl Ferdinand Langhans, and Le Corbusier, as well as the influential acoustic ideas of Athanasius Kircher, Richard Wagner, and Marshall McLuhan. Drawing on interdisciplinary theories of media and auditory culture, Joseph L. Clarke reveals how architecture has impacted the ways we continue to listen to, talk about, and creatively manipulate sound in the physical environment.

Praise For Echo's Chambers: Architecture and the Idea of Acoustic Space…

"Echo's Chambers is an important work of intellectual and architectural history that charts the history of the engagement of architects with the emerging science of acoustics from the Enlightenment to the mid-twentieth century. Joseph L. Clarke has grounded his work in four linguistic cultures, consulting an impressive range of rare source materials in French, Italian, and German. The result is a highly original book that will appeal to diverse audiences at the intersection of architecture, sound, and space." —Kathleen James-Chakraborty, University College Dublin


"In this outstanding work, Joseph L. Clarke has built a very nuanced history that will change the way we understand the cultural production of modern architecture. He offers us a history of acoustics not simply as a science of sound but as a social phenomenon in which audiences of performances and audiences of the built environment began to hear their world differently, and in turn were encountering spaces that taught them how to hear and see differently. Echo's Chambers shows how deeply intertwined sound and architecture have been and, therefore, makes a major contribution to both architectural history and sound studies as mutually inclusive fields of study.” —Niall Atkinson, author of The Noisy Renaissance: Sound, Architecture, and Florentine Urban Life

Joseph L. Clarke is assistant professor of art history at the University of Toronto and a licensed architect. His scholarship explores how modern architecture has defined itself as a discipline through particular techniques, theories, and representational conventions.
Loading...
or support indie stores by buying on