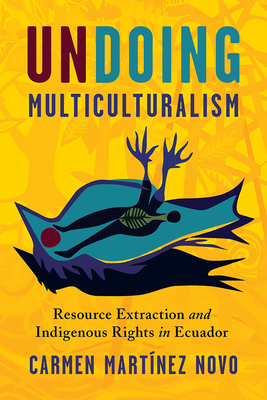 President Rafael Correa (2007-2017) led the Ecuadoran Citizens’ Revolution that claimed to challenge the tenets of neoliberalism and the legacies of colonialism. The Correa administration promised to advance Indigenous and Afro-descendant rights and redistribute resources to the most vulnerable. In many cases, these promises proved to be hollow. Using two decades of ethnographic research, Undoing Multiculturalism examines why these intentions did not become a reality, and how the Correa administration undermined the progress of Indigenous people. A main complication was pursuing independence from multilateral organizations in the context of skyrocketing commodity prices, which caused a new reliance on natural resource extraction. Indigenous, Afro-descendant, and other organized groups resisted the expansion of extractive industries into their territories because they threatened their livelihoods and safety. As the Citizens’ Revolution and other “Pink Tide” governments struggled to finance budgets and maintain power, they watered down subnational forms of self-government, slowed down land redistribution, weakened the politicized cultural identities that gave strength to social movements, and reversed other fundamental gains of the multicultural era.

“Draws on decades of ethnographic research and collaboration with indigenous movements in Ecuador. Accordingly, the best and most useful part of the book is the discussion of the relationship between anthropologists and participants in indigenous movements.” —CHOICE

“Few studies of Latin American indigenous movements effectively move between the national and the local levels, a task left to sociologists and political scientists. While ethnographers examine the local level, they rarely look at its broader articulations. Undoubtedly, an understanding of the complexities of these movements requires a longer time-commitment than most scholars can manage. Carmen Martínez makes a strong case for more rooted scholarship. Her crucial take on indigenous movements demonstrates that political decision-making is not simply top-down, but takes on more complex arrangements, which can only be explored through years of multi-sited research.” —Joanne Rappaport, Georgetown University

“This insightful analysis brings a welcome challenge to the claims that the ‘Pink Tide’ in Ecuador benefitted indigenous communities. It documents how the ‘progressive’ Correa government in Ecuador dismantled multicultural policies and institutions built over years by indigenous activists, the Catholic Church, and the neoliberal state. Especially after indigenous organizations protested the government’s continued extractivist development plans, Carmen Martínez Novo shows how intercultural education (EIB) was demolished, indigenous communities repressed and militarized, NGOS and intellectuals silenced, and overt racism increased. Undoing Multiculturalism is a must-read.” —Nancy Postero, University of California San Diego, and author of The Indigenous State: Race, Politics, and Performance in Plurinational Bolivia

Carmen Martínez Novo is professor of Latin American Studies at the University of Florida and editor in chief of the Latin American Research Review. She is the author of Who Defines Indigenous? and editor of Repensando los movimientos indígenas.
Loading...
or
Not Currently Available for Direct Purchase