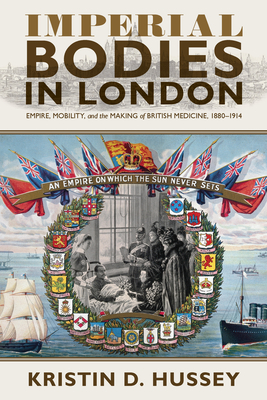 Empire, Mobility, and the Making of British Medicine, 1880–1914 (Sci & Culture in the Nineteenth Century)

Winner, 2022 Whitfield Prize for First Monograph in the Field of British and Irish History

Since the eighteenth century, European administrators and officers, military men, soldiers, missionaries, doctors, wives, and servants moved back and forth between Britain and its growing imperial territories. The introduction of steam-powered vessels, and deep-docks to accommodate them at London ports, significantly reduced travel time for colonists and imperial servants traveling home to see their families, enjoy a period of study leave, or recuperate from the tropical climate. With their minds enervated by the sun, livers disrupted by the heat, and blood teeming with parasites, these patients brought the empire home and, in doing so, transformed medicine in Britain. With Imperial Bodies in London, Kristin D. Hussey offers a postcolonial history of medicine in London. Following mobile tropical bodies, her book challenges the idea of a uniquely domestic medical practice, arguing instead that British medicine was imperial medicine in the late Victorian era. Using the analytic tools of geography, she interrogates sites of encounter across the imperial metropolis to explore how medical research and practice were transformed and remade at the crossroads of empire.


Praise For Imperial Bodies in London: Empire, Mobility, and the Making of British Medicine, 1880–1914 (Sci & Culture in the Nineteenth Century)…

“Hussey convincingly argues that in addition to its enduring and devastating impact on far-flung indigenous populations, the British imperial project also had significant repercussions within some of the most mobile populations—the builders of empire: sailors, soldiers, merchants, missionaries, and other adventurers. This fascinating and well-researched work offers a fresh perspective on the history of medicine and empire, making an excellent contribution to postcolonial historiography.” —CHOICE

"This fine contribution to postcolonial scholarship shows how the interwoven movements of ships, people, and diseases transformed tropical medicine at the height of the British empire. Kristin Hussey casts important new light on the movement of colonial residents back and forth across the globe as they brought their medical conditions to the forefront of London medical circles. Uniquely, she concentrates on the disorders of daily expatriate life: psychiatric disarray, lassitude, digestive disturbance, failing eyesight, and the hidden parasitic cargo of an overseas existence. Together, doctors and patients encountered disease, race, power, and geography in an entirely new manner that helped construct an 'imperial body' in need of metropolitan control." —Janet Browne, Harvard University

Kristin D. Hussey is a historian of medicine and museum curator. She is currently a postdoctoral research fellow at the University of Copenhagen’s Medical Museion and Novo Nordisk Foundation Center for Basic Metabolic Research (CBMR). In 2018, she was the inaugural recipient of the McCarthy Award for the History of Medicine.