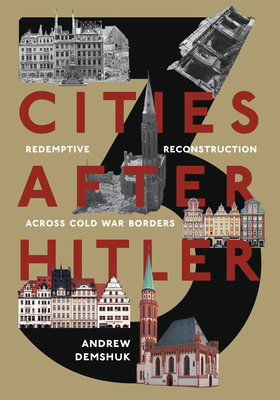 Three Cities after Hitler compares how three prewar German cities shared decades of postwar development under three competing post-Nazi regimes: Frankfurt in capitalist West Germany, Leipzig in communist East Germany, and Wrocław (formerly Breslau) in communist Poland. Each city was rebuilt according to two intertwined modern trends. First, certain local edifices were chosen to be resurrected as “sacred sites” to redeem the national story after Nazism. Second, these tokens of a reimagined past were staged against the hegemony of modernist architecture and planning, which wiped out much of whatever was left of the urban landscape that had survived the war. All three cities thus emerged with simplified architectural narratives, whose historically layered complexities only survived in fragments where this twofold “redemptive reconstruction” after Nazism had proven less vigorous, sometimes because local citizens took action to save and appropriate them. Transcending both the Iron Curtain and freshly homogenized nation-states, three cities under three rival regimes shared a surprisingly common history before, during, and after Hitler—in terms of both top-down planning policies and residents’ spontaneous efforts to make home out of their city as its shape shifted around them.

“In this innovative new study, Denshuk focuses on the rebuilding of three German cities . . . and explores how local elites rebuilt their communities in ways that would assist in the creation of a new postwar identity. . . . Highly recommended.” —CHOICE

“Andrew Demshuk’s illuminating Three Cities after Hitler is both a wide-ranging architectural history of German and post-German cities and an insightful comparison of postwar urban reconstruction across the Iron Curtain. In West and East Germany, and communist Poland, city planners pursued what Demshuk calls ‘redemptive reconstruction,’ a selective mix of modernist architecture and historicist renovation to shape new cityscapes for a new era. As Demshuk masterfully demonstrates, Communists and Liberal Democrats, Germans and Poles, followed unexpectedly similar patterns in the reconstruction of cities devastated by war.” —Eagle Glassheim, University of British Columbia

“Andrew Demshuk’s Three Cities After Hitler is a sophisticated study of the challenges of reshaping meaning, memory, and function from the rubble of three great cities: Frankfurt, Leipzig, and Wrocław/Breslau. Demshuk’s analysis of how a democratic West Germany, a socialist East Germany, and a socialist (but nationalist) Poland succeeded and failed to memorialize their new ideals of urban life in these cities is comparative history at its best.” —T. David Curp, Ohio University

Andrew Demshuk is associate professor of history at American University in Washington, DC. His previous books include Bowling for Communism: Urban Ingenuity at the End of East Germany, Demolition on Karl Marx Square: Cultural Barbarism and the People’s State in 1968, and The Lost German East: Forced Migration and the Politics of Memory.