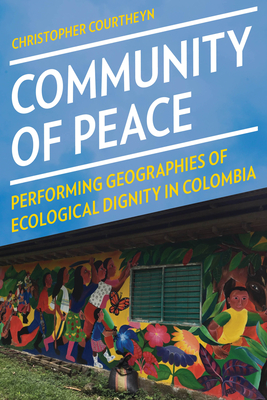 Achieving peace is often thought about in terms of military operations or state negotiations. Yet it also happens at the grassroots level, where communities envision and create peace on their own. The San José de Apartadó Peace Community of small-scale farmers has not waited for a top-down peace treaty. Instead, they have actively resisted forced displacement and co-optation by guerrillas, army soldiers, and paramilitaries for two decades in Colombia’s war-torn Urabá region. Based on ethnographic action research over a twelve-year period, Christopher Courtheyn illuminates the community’s understandings of peace and territorial practices against ongoing assassinations and displacement. San José’s peace through autonomy reflects an alternative to traditional modes of politics practiced through electoral representation and armed struggle. Courtheyn explores the meaning of peace and territory, while also interrogating the role of race in Colombia’s war and the relationship between memory and peace. Amid the widespread violence of today’s global crisis, Community of Peace illustrates San José’s rupture from the logics of colonialism and capitalism through the construction of political solidarity and communal peace.

“In April 2021, Colombia erupted, witnessing the largest social uprising in its modern history. Courtheyn’s account of San José’s Community of Peace provides a privileged perspective on one of the main undercurrents of this movement: the lucid peasant resistance against the ongoing process of dispossession of their lands and ecologies, opposing solidarity and creativity to the expansion of capitalism and its inherent forms of violence and destruction.” —Margarita Serje, Universidad de los Andes

Christopher Courtheyn is assistant professor in the School of Public Service at Boise State University. He earned his PhD in geography at the University of North Carolina at Chapel Hill and holds a BA in Latin American studies from the University of California, Berkeley.