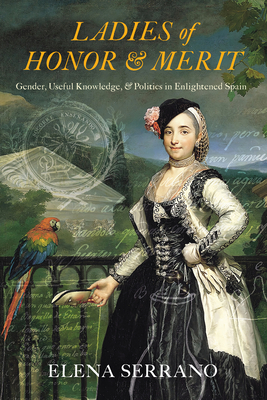 Ladies of Honor and Merit

In the late eighteenth century, enlightened politicians and upper-class women in Spain debated the right of women to join one of the country’s most prominent scientific institutions: the Madrid Economic Society of Friends of the Country. Societies such as these, as Elena Serrano describes in her book, were founded on the idea that laypeople could contribute to the advancement of their country by providing “useful knowledge,” and their fellows often referred to themselves as improvers, or friends of the country. After intense debates, the duchess of Benavente, along with nine distinguished ladies, claimed, won, and exercised the right of women to participate in shaping the future of their nation by inaugurating the Junta de Damas de Honor y Mérito, or the Committee of Ladies of Honor and Merit. Ten years later, the Junta established a network of over sixty correspondents extending from Tenerife to Asturias and Austria to Cuba. With this book, Serrano tells the unknown story of how the duchess and her peers—who succeeded in creating the only known female branch among some five hundred patriotic societies in the eighteenth century—shaped Spanish scientific culture. Her study reveals how the Junta, by stressing the value of their feminine nature in their efforts to reform education, rural economy, and the poor, produced and circulated useful knowledge and ultimately crystallized the European improvement movement in Spain within an otherwise all-male context.


Praise For Ladies of Honor and Merit: Gender, Useful Knowledge, and Politics in Enlightened Spain…

“Elena Serrano offers an innovative and compelling interpretation of the role of upper-class women in the advancement of Spanish society at the end of the eighteenth century and their engagement in creating, applying, and disseminating useful knowledge to improve the living conditions of their fellow citizens. She draws a detailed and hitherto unknown picture of the various scenarios where they intervened through an all-women’s organization. Ladies of Honor and Merit contributes decisively to reshaping the European-wide view of Enlightenment history that often fails to engage with Spanish history.” —Montserrat Cabré, Universidad de Cantabria