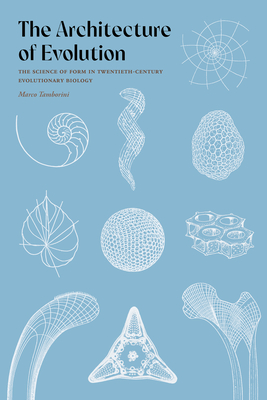 The Architecture of Evolution

The Science of Form in Twentieth-Century Evolutionary Biology

In the final decades of the twentieth century, the advent of evolutionary developmental biology (evo-devo) offered a revolutionary new perspective that transformed the classical neo-Darwinian, gene-centered study of evolution. In The Architecture of Evolution, Marco Tamborini demonstrates how this radical innovation was made possible by the largely forgotten study of morphology. Despite the key role morphology played in the development of evolutionary biology since the 1940s, the architecture of organisms was excluded from the Modern Evolutionary Synthesis. And yet, from the beginning of the twentieth century to the 1970s and ’80s, morphologists sought to understand how organisms were built and how organismal forms could be generated and controlled. The generation of organic form was, they believed, essential to understanding the mechanisms of evolution. Tamborini explores how the development of evo-devo and the recent organismal turn in biology involved not only the work of morphologists but those outside the biological community with whom they exchanged their data, knowledge, and practices. Together with architects and engineers, they worked to establish a mathematical and theoretical basis for the study of organic form as a mode of construction, developing and reinterpreting important notions that would play a central role in the development of evolutionary developmental biology in the late 1980s. This book sheds light not only on the interdisciplinary basis for many of the key concepts in current developmental biology but also on contributions to the study of organic form outside the English-speaking world.


Praise For The Architecture of Evolution: The Science of Form in Twentieth-Century Evolutionary Biology…

"The Architecture of Evolution is a major contribution to the historiography of morphology in the twentieth century. Tamborini shows how the riddle of organismal form was a central preoccupation of theoretically and philosophically minded biologists, and he examines how the discipline of morphology was variously conceptualized and pursued in different national and intellectual traditions. It is an exceptionally rich book that will be essential reading for anyone interested in morphology and its relation to evolution." —Daniel J. Nicholson, George Mason University

“Marco Tamborini’s book is a much-needed history of morphological thought in the twentieth century. It provides an engaging intellectual journey, leading us through biology, architecture, philosophy, engineering, mathematics, politics, and art. This is a highly original contribution that shows how the science of form emerged from an international and interdisciplinary enterprise.” —Maurizio Esposito, University of Lisbon, Portugal

Marco Tamborini teaches history and philosophy of science at the Technical University of Darmstadt and is a member of the Junge Akademie | Mainz at the Academy of Sciences and Literature | Mainz, as well as fellow of the Johanna Quandt Young Academy at Goethe. His research focuses on the history and philosophy of biology, technoscience, and architecture from the nineteenth century to the present.