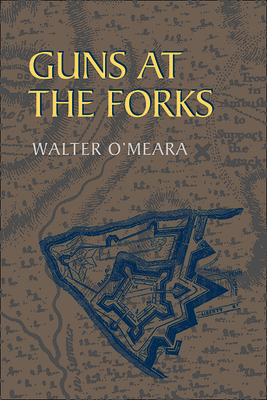 Guns at the Forks (The Library of Western Pennsylvania History)

Guns at the Forks is a special reissue commemorating the 250th anniversary of the French and Indian War.  In a spirited, intelligent, and informative history, O’Meara tells the story of five successive forts, particularly Fort Duquesne and Fort Pitt, and the dramatic part they played in the war between 1750 and 1760. He describes Washington’s capitulation at Fort Necessity, Braddock’s defeat at the Monongahela, and Forbes’s successful campaign to retake Fort Duquesne.  Although most of the action in the book takes place at the strategically important forks of the Ohio, where present-day Pittsburgh stands, O’Meara’s narrative relates the two forts to the larger story of the French and Indian War and elucidates their roles in sparking a global conflict that altered the course of world events and decided the fate of empires.

“A lively account of the fighting at the forks of the Ohio River between 1750 and 1760.”
—American Historical Review

“Careful searching of source materials, judicious interpretation, and superior style have created a work of major significance for the first critical period in the history of Appalachia.”
—Appalachian Notes

Walter O’Meara was a New York advertising executive who retired in 1952 to write historical nonfiction and novels. By the time of his death in 1989, he had published sixteen books, including The Grand Portage, which received an award from the American Association for State and Local History.
Loading...
or support indie stores by buying on