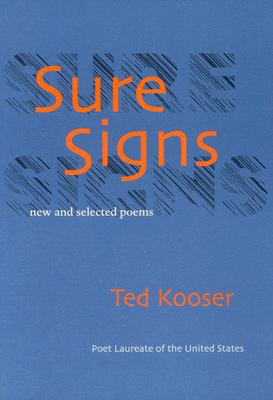 Named U.S. Poet Laureate for 2004-2006, Ted Kooser is one of America's masters of the short metaphorical poem. Dana Gioia has remarked that Kooser has written more perfect poems than any poet of his generation. Long admired and praised by other poets, Kooser is also accesible to the reader not familiar with contemporary poetry.

“Kooser is the master of the short poem.  I found it impossible to put Sure Signs down until I had finished the entire book.  It is a pleasure to read a poet like Kooser whose imagination is naturally metaphorical.”
--Hudson Review

“Ted Kooser’s Sure Signs could well become a classic, precisely because so many of the poems are not only excellent but are readily possessible.”
--Black Warrior Book Review

“Sure Signs is complete and mature work of poetry.  There is little in contemporary poetry that can compare with it in excellence. . . . I find myself surprised at its freshness, the purity of the writing, its open-eyed honesty, its humor and kindliness, its strength of character, its overwhelming sense of place, and so much more. . . . I see it as a lasting work, comparable to the best of the Spoon River or Frost in his richest vein.”

“We had known, some of us, that Ted Kooser was good, but how good this substantial volume tells.  He  has, with his wit and his earthiness, his imagination and his lucidity, staked out as his own a region—western it is—somewhere poetically between Frost and Williams (he shows us, to our surprise, how close they were).  It is, in short, a volume we can all feel—and we will in the indefinite future—grateful for.”

“[These poems] are evocative of loneliness, friendships, great distances, the value of things usually disregarded and of lives usually unsung; and all this in a way that is pecularly American.”

Ted Kooser was named U.S. Poet Laureate for 2004-2006. He was born in Ames, Iowa, in 1939. Kooser was educated in the Ames public schools, at Iowa State University, and the University of Nebraska. His awards include two National Endowment for the Arts Fellowships, the Stanley Kunitz Prize from Columbia magazine, and the 1981 Society of Midland Authors Award for Poetry for Sure Signs.
Loading...
or support indie stores by buying on