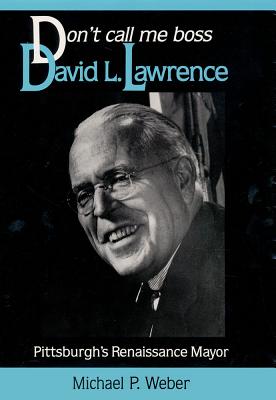 The death of David Leo Lawrence in 1966 ended a fifty-year career of major influence in American politics. In a front-page obituary, the New York Times noted that Lawrence, the longtime mayor of Pittsburgh, governor of Pennsylvania, and power in Democratic national politics, disliked being called Boss. But, the Times noted, "he was one anyway."

Certainly Lawrence was a consumate politician. Born in a poor, working-class neighborhood, in the present-day Golden Triange of Pittsburgh, he was from boyhood an astute student of politics and a devoted Democrat. Paying minute attention to every detail at the ward and precinct level, he revived the moribund Democratic party of Pittsburgh and fashioned a machine that upset the long-entrenched Republican organization in 1932.

When "Davy" Lawrence, as he was affectionately known, won the gubernatorial election in 1958, he became the first Roman Catholic governor of Pennsylvania and the oldest. But he achieved his greatest public recognition as mayor of Pittsburgh. Taking office in 1945, at the close of World War II, this stalwart Democrat formed an alliance with the predominantly Republican business community to bring about the much acclaimed Pittsburgh Renaissance, transforming the downtown business district and persuading many large corporations to retain their national headquarters in Pittsburgh. In 1958 the editors of Fortune magazine name Pittsburgh as one of the eight best administered cities in America.

Don't Call Me Boss examines the lengthy career of this remarkable politician. Using over one hundred interviews, as well as extensive archival material, Michael Weber demonstrates how Lawrence was able to balance his intense political drive and devotion to the Democratic party with the larger needs of his city and state. Although his administration was not free of controversy, as indicated by the city's police and free work scandals. Lawrence showed that it was possible to make the transition from nineteenth-century political boss to modern municipal manager. He was one of the few politicians of the century to do so. When the undisputed bosses of other American cities - the Curleys, Pendergasts, and Hagues - were out of power and disgraced, Lawrence was elected governor of Pennsylvania.

More than twenty years after his death, David L. Lawrence and his success in rebuilding the city of Pittsburgh continue to serve as an example of effective urban leadership.

Michael P. Weber is Dean of the Graduate School of Liberal Arts and Sciences and Professor of Urban History at Duquesne University.
Loading...
or support indie stores by buying on