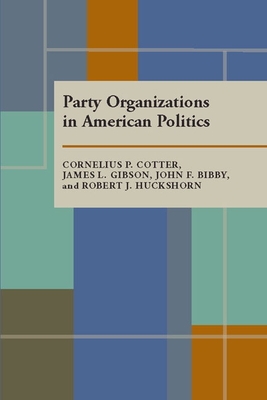 Contradicting the conventional political wisdom of the 1970s, which said state political parties were dormant and verging upon extinction, this book reveals that state party organizations actually grew stronger in the 1960s and 1970s.

Reprinted with a new preface that covers changes in the 1980s in electoral politics, Party Organizations in American Politics encourages a reappraisal of scholarly treatment of party organization in political science.

“Impressive. To the best of my knowledge, it is the discipline's first attempt to survey all the state party organizations, as well as thousands of local party organizations within them. It was a monumental undertaking, one not likely to be repeated soon. . . . The analysis is always careful, thoughtful, subtle, and insightful.”
—Political Science Quarterly

“Fills what was a substantial gap in the literature on parties. . . . The examination of the roles of parties at both the state and local levels and the effect of organizational strength on other party activities is enlightening and, as far as I know, unique. . . . No theory of American political parties or party decline can afford to ignore the evidence presented here.”
—American Political Science Review