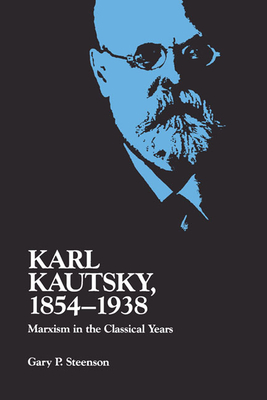 Marxism in the Classical Years

The first major study of Karl Kautsky, considered the most influential Marxian theoretician in the world, from 1895 to 1914. Outside of Friedrich Engels, Kautsky did more to popularize Marism than any other person. An entire generation of Marxists, including Lenin and Trotsky, learned the doctrine in large part from Kautsky.

Gary P. Steenson is a historian, specializing in Marxism and Europe. He is the author of several books, including: “Not One Man! Not One Penny!”: German Social Democracy, 1863–1914 and After Marx, Before Lenin: Marxism and Socialist Working-Class Parties in Europe, 1884-1914.

“This outstanding political biography traces the development of Kautsky as a thinker and a Socialist. The author explains Kautsky’s debates with Eduard Bernstein, Ross Luxemburg, Eduard David, Georg Ledebour and others with great clarity.”
—Labor History

“Steenson's study is especially welcome. It is well researched, concise and judicious in the best sense of the word. Measured criticisms are paired with sympathetic perceptions as Steenson seeks to comprehend both Kautsky and his critics. Essential reading for those working in the history of socialist thought before and after the first World War.”
—The American Historical Review

“The author’s achievement is indeed a notable one . . . there is a good bit of valuable insight contains in Kautsky’s formulations, and those who today are turning back to the “Young Marx” for inspiration might profitably spend a night with ‘Old Kautsky’ on the way.”
—Social Science Quarterly
or support indie stores by buying on
Copyright © 2020 American Booksellers Association