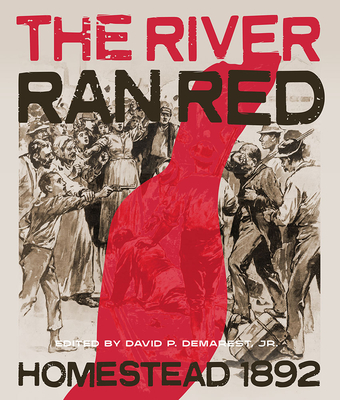 The violence that erupted at Carnegie Steel's giant Homestead mill near Pittsburgh on July 6. 1892, caused a congressional investigation and trials for treason, motivated a nearly successful assassination attempt on Frick, contributed to the defeat of President Benjamin Harrison for a second term, and changed the course of the American labor movement.

"The River Ran Red" commemorates the one-hundredth anniversary of the Homestead strike of 1892. Instead of retelling the story of the strike, it recreates the events of that summer in excerpts from contemporary newspapers and magazines, reproductions of pen-and-ink sketches and photographs made on the scene, passages from the congressional investigation that resulted from the strike, first-hand accounts by observers and participants, and poems, songs, and sermons from across the country. Contributions by outstanding scholars provide the context for understanding the social and cultural aspects of the strike, as well as its violence.

"The River Ran Red" is the collaboration of a team of writers, archivists, and historians, including Joseph Frazier Wall, who writes of the role of Andrew Carnegie at Homestead, and David Montgomery, who considers the significance of the Homestead Strike for the present. The book is both readable and richly illustrated. It recalls public and personal reactions to an event in our history who's reverberations can still be felt today.

Praise For The River Ran Red…

“Readable, as well as richly illustrated.”