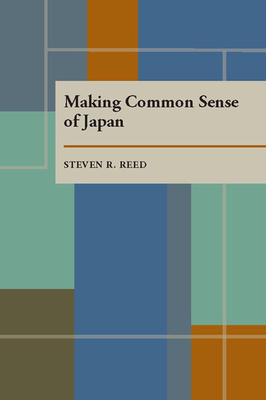 Common misconceptions about Japan begin with the notion that it is a “small” country (it's actually lager than Great Britain, Germany or Italy) and end with pronouncements that the Japanese think differently and have different values-they do things differently because that's the way they are.
Steven Reed takes on the task of demystifying Japanese culture and behavior. Through examples that are familiar to an American audience and his own personal encounters with the Japanese, he argues that the apparent oddity of Japanese behavior flows quite naturally from certain objective conditions that are different from those in the United States.
Mystical allegations about national character are less useful for understanding a foreign culture than a close look at specific situations and conditions. Two aspects of the Japanese economy have particularly baffled Americans: that Japanese workers have “permanent employment” and that the Japanese government cooperates with big business. Reed explains these phenomena in common sense terms. He shows how they developed historically, why they continue, and why they helped produce economic growth. He concludes that these practices are not as different from what happens in the United States as they may appear.

“Steven Reed has written a clever little book arguing against an understanding of Japan that relies on cultural specificity. . . . This is a good book that should be on the reading list of all undergraduate courses on Japan.”
—Japanese Studies

“This book is a 'must read' for anybody who teaches about or is interested in contemporary Japan.  The author provides a number of illuminating examples to demystify various stereotypes about Japanese culture, while revealing the naiveté of culture-driven arguments about Japanese political economy. . . .The book will also serve as excellent seminar reading, as it is certain to facilitate lively debate and discussion on contemporary Japan.”
—Pacific Affairs

“This intriguing volume is highly recommended for not only scholars, students, and business executives, but for anyone interested in gaining a better understanding of the why and how of Japanese business activities.”
—Choice