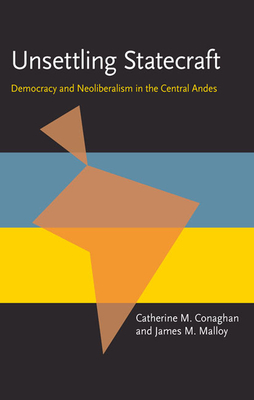 Latin America in the 1980s was marked by the transition to democracy and a turn toward economic orthodoxy.  Unsettling Statecraft analyzes this transition in Bolivia, Ecuador, and Peru, focusing on the political dynamics underlying change and the many disturbing tendencies at work as these countries shed military authoritarianism for civilian rule.

Conaghan and Malloy draw on insights from the political economy literature, viewing policy making as a “historically conditioned” process, and they conclude that the disturbing tendencies their research reveals are not due to regional pathology but are part of the more general experience of postmodern democracy.

James M. Malloy is professor emeritus of political science at the University of Pittsburgh.

“This is an excellent work of scholarship, and one with considerable importance theoretically in the literature of Latin American politics and economics, as well as democracy and policymaking patterns.”
–John D. Martz, Penn State University

This is the first rigorously comparative, in-depth study of the politics of neoliberalism in Latin America during the 1980s. . . . Theoretically innovative, empirically rich and polished, this study will be a 'must read' for scholars interested in Latin American politics and political economy.”
—Cynthia McClintock
or
Not Currently Available for Direct Purchase
Copyright © 2020 American Booksellers Association