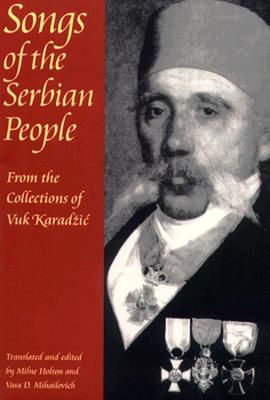 Songs of the Serbian People (Paperback)

From the Collections of Vuk Karadzic (Russian and East European Studies)

In the early nineteenth century, Vuk Karadzic, a Serb scholar and linguist, collected and eventually published transcriptions of the traditional oral poetry of the South Slavs.  It was a monumental and unprecedented undertaking.  Karadzic gathered and heard performances of the rich songs of Balkan peasants, outlaws, and professional singers and their rebel heroes.  His four volumes constitute the classic anthology of Balkan oral poetry, treasured for nearly two centuries by readers of all literatures, and influential to such literary giants as Goethe, Merimee, Pushkin, Mickiewicz, and Sir Walter Scott.

This edition of the songs offers the most complete and authoritative translations ever assembled in English.  Holton and Mihailovich, leading scholars of Slavic literature, have preserved here the unique meter and rhythm at the heart of Serbian oral poetry, as well as the idiom of the original singers.  Extensive notes and comments aid the reader in understanding the poems, the history they record and the oral tradition that lies beneath them, the singers and their audience.

The songs contain seven cycles, identified here in sections titled: Songs Before History, Before Kosovo, the Battle of Kosovo, Marko Karadzic, Under the Turks, Songs of the Outlaws, and Songs of the Serbian Insurrection.  The editors have selected the best known and most representative songs from each of the cycles.  A complete biography is also provided.

Milne Holton is professor of English and comparative literature at the University of Maryland.    Among his books are The Big Horse: Stories of Modern Macedonia, Reading the Ashes, The New  Polish Poetry, Austrian Poetry Today, and with Mihailovich, Serbian Poetry from the Beginnings to the Present.

Vasa D. Mahailovich is professor emeritus of Slavic languages and literature at the University of North Carolina, Chapel Hill. His many books include Introduction to Yugoslav Literature, White Stones and Fir Trees: An Anthology of Slavic Literature, Contemporary Yugoslav Poetry, Serbian Poetry from the Beginnings to the Present, and Dictionary of Literary Biography: South Slav Writers Before World War II.

Praise For Songs of the Serbian People: From the Collections of Vuk Karadzic (Russian and East European Studies)…

“Commentaries to each translated poem are expertly done, useful and informative. They abound with cultural detail and historical observations, helping the reader, who does not know the Serbian language and who is not familiar with the historical and social context, to better understand the folk songs which make up the soul of the Serbian people.”
—American Srbobran

"In their native culture, the songs have particular resonance on several levels: the ritual nature of their presentation, their highly formulaic language, their function as a repository of popular belief all create a mental world which is consciously different from the every day reality of the listeners' lives.  Some translators have endeavored to convey something of this 'otherworldly' stylized quality . . . Others have sought to render the sense of the songs in metric patterns closer to English folklore tradition.  In their collection, Milne Holton and Vasa D. Mihailovich have chosen to try to reproduce accurately the songs' compelling rhythm, in a form as close to the original as possible. . . . The value of the Holton and Mihailovich volume is enhanced by a useful introduction, notes and a select bibliography, increasing its interest for both the student and the general reader. . . . the Holton and Mihailovich explanation is a model of balance and restraint."
--THE SLAVONIC REVIEW

“This voluminous translated selection represents a joint labour and scholarly accomplishment. It is a work of very high competence, broad and multifaceted erudition, a meticulously orchestrated variety of technical skills and expertise, absolute integrity and impartiality, even-handed benevolence, invariable respect for the facts, and balance and objectivity. . . . There is no doubt that this large and formative collection of 44 poems will be of great and lasting value and interest to everyone concerned with the folk traditions and oral literatures of the perplexing and psychologically intriguing Southern Slavs.”
—South Slav Journal
or
Not Currently Available for Direct Purchase
Copyright © 2020 American Booksellers Association