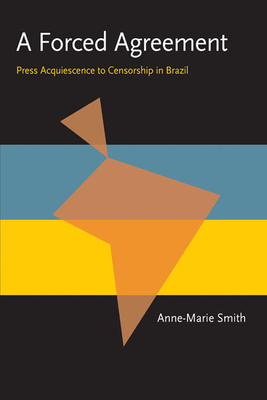 During much of the military regime in Brazil (1964-1985), an elaborate but illegal system of restrictions prevented the press from covering important news or criticizing the government. In this intriguing new book, Anne-Marie Smith investigates why the press acquiesced to this system, and why this state-administered system of restrictions was known as “self-censorship.”
Smith argues that it was routine, rather than fear, that kept the lid on Brazil's press. The banality of state censorship-a mundane, encompassing set of automatically repeated procedures that functioned much like any other state bureaucracy-seemed impossible to circumvent. While the press did not consider the censorship legitimate, they were never able to develop the resources to overcome censorship's burdensome routines.

“A Forced Agreement is an excellent analysis of press-state relations. She has done the necessary research to make this a useful foundation for years to come. Her study of the alternative press is the first I have ever seen on the topic and is simply outstanding.”
--Luso-Brazilian Review

“This is a significant [book] about an important subject, thorough and well-written.”
—Peter McDonough

Anne-Marie Smith received her Ph.D. in political science and is an independent consultant in Washington, D.C., writing on issues of international development and conflict resolution.
Loading...
or support indie stores by buying on