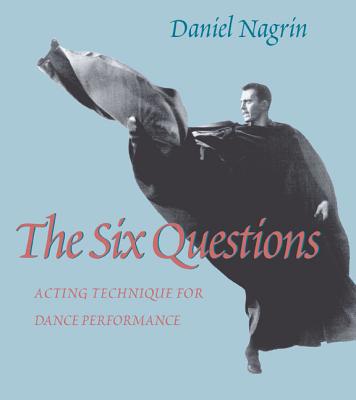 In the late twenties, actors and directors of the Group Theatre, who were pioneering the use of Stanislavski's teachings, saw the value of teaching ballet and the emerging modern dance. Actors now routinely learn dance, but dancers rarely study acting. In The Six Questions, Nagrin maintains that a command of acting techniques allows the dancer to couple the passion of a body in motion with the heart and mind of the dancer.

In five parts, the book first examines the personal essentials demanded by dance. The second part looks at the pitfalls inherent in the act of performing from vanity to self-hatred. The third part, the core of the book, poses six questions: Who? is doing what? to whom? where and when? and why? and against what obstacle? In the fourth part, Nagrin looks at the tools for working on the role, and the fifth part enters into the very act of performing. All of the work is handled in terms of movement alone: no dialogue or scenes from plays are used.

The Six Questions is a companion piece to Nagrin's other works, How To Dance Forever, and Dance and the Specific Image: Improvisation. Together they present an invaluable teaching and learning tool for anyone in love with dance.

Daniel Nagrin, dubbed “the great loner of American dance” by Dance Magazine, has worked with Martha Graham, Helen Tamiris, Mme. Anderson-Ivantzova, and Anna Sokolow. He has danced on Broadway, in film and television, and has toured nationally and internationally as a solo concert artist. He is professor emeritus of dance at Arizona State University.
Loading...
or
Not Currently Available for Direct Purchase